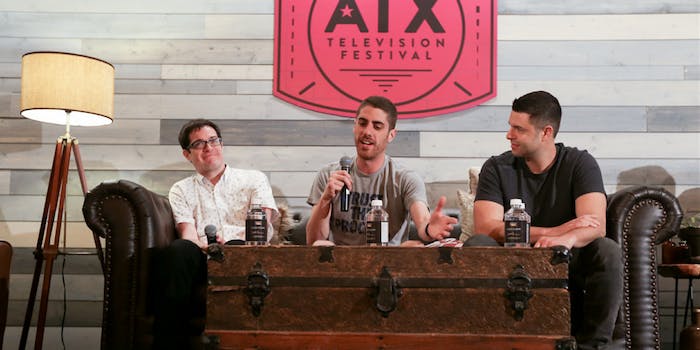 The creators of American Vandal never wanted the series to be a parody of true-crime documentaries or a mockumentary. They really wanted you to think deeply and critically about who drew the dicks—ponder it like you might The Staircase.

Close to a year after its debut, the Netflix series about a high school student accused of vandalizing teachers’ cars with spray-painted dicks—and the makeshift investigation that followed—has still captured the imagination. As the four panelists of the ATX Television Festival’s American Vandal panel sat down on Friday, moderator Ben Blacker cracked a joke about how the all-male panel is definitely “solving the diversity problem in Hollywood.”

Show creators Dan Perrault and Tony Yacenda and executive producers Joe Farrell and Dan Lagana are something of a reflection of the characters in American Vandal; lead Jimmy Tatro, who plays accused student Dylan Maxwell, is a Cali bro who wants to make people laugh but is also kind of a doofus. Yacenda assured that he didn’t want to just parody true-crime docs, and that’s clear in the final episode, which packs an emotional punch. (Yacenda took responsibility for coming up with the dicks.)

The approach was always mystery first, said Lagana. Making a Murderer, the U.K. Office, Freaks and Geeks, and Election were all influential texts. Funny or Die’s Farrell cited Will Ferrell’s subtle projects like A Deadly Adoption as a template for the tone of American Vandal. He showed his parents a couple of episodes before the show debuted, and the reaction mirrored those to come. After the first episode, his mom was kind of shocked, but by the second episode she said, “There is no way he did that crime.”

There was some real-world resonance: Lagana’s 18-year-old stepson got in trouble for drawing a dick at school and was suspended. (He also took his stepson paintballing and eavesdropped on everything he and his friends said, for research.) The Nana’s party storyline came from a writer who actually attended something like that. They always wanted it to be Dylan’s story and for the ending to be realistic and not just a big dick joke. There is an emotional weight to the show, but when people on Reddit started dissecting the series, they knew they might have something bigger.

They threw out little season 1 details, like how one episode was going to be a whole day with Dylan’s prank crew the Wayback Boys. This is now an episode I want to see. There was also some true method acting: Calum Worthy, who plays weasel Alex Trimboli, didn’t wash his face for two weeks to get authentic pimples. Tyler Alvarez, who plays documentarian Peter Maldonado, carried a notebook with him with his own questions about scenes, and there was a lot of improv across the 25-day shoot. In one example, Alvarez reportedly asked the Wayback Boys: If Dylan cheated on a test, would they snitch?

No teaser clip or solid details about season 2 were offered up, save for a reference to a “road trip” Perrault and Yacenda took, but they did mention how a different true-crime aesthetic might be used in the new season.