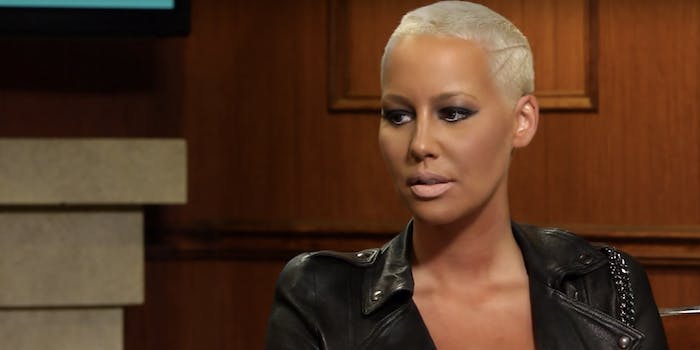 Amber Rose accuses GQ of dumbing her down

Rose didn’t take too kindly to the article’s foreword.

Amber Rose does not approve of the introduction to her interview with GQ in which they label her as “Kanye West’s infamous ex, Wiz Khalifa’s baby mama.”

The magazine reads: “Amber Rose wrote the book on it. No, seriously: Kanye’s infamous ex, Wiz Khalifa’s baby mama, America’s toughest bald babe since Sigourney Weaver in ‘Alien 3,’ is about to publish a book of life lessons called ‘How to Be a Bad B****.’ Like Amber herself, it’s all heart. Unlike Amber, it’s not thick! The teen stripper turned megalomaniac muse spoke to Carrie Battan about her beautiful dark twisted journey to the top.”

Rose didn’t take too kindly to the article’s foreword. Even when it doesn’t identify her by the men she’s been romantically linked to, it alludes to their work (“Beautiful dark twisted” is a nod to West’s 2010 album “My Dark Beautiful Twisted Fantasy”). Rose took to Instagram to take the magazine to task for the sexist qualifiers.

RELATED: Amber Rose shows there’s no ‘shame’ in her game for Funny or Die

“Really @gq??? I’m so much more then Kanye’s Ex or Wiz’s baby’s mama. Damn, why the f*** did u guys reach out to me for this article and photoshoot? To dumb me down? I talked about feminism and my Slutwalk…,” she writes. “Wtf nice title smh I expected so much more from u guys and I’m so disappointed. I was so excited to be featured in GQ not realizing I was shooting for a tabloid. My slutwalk was for ignorant s*** like this. Oh ‘Her beautiful dark twisted journey to the top’? Nice pun. Negative af. Thx for nothing.”

Rose has been making it her mission to remove the stigma from women who enjoy healthy sex lives. She organized a “slut walk” in Los Angeles to unite women and take a stand against labels like slut, whore and the like and to call out the media for the way they’ve treated her in the wake of her separation from rapper Wiz Khalifa.

The demonstration was followed by a Funny or Die sketch that points out the outdatedness of the “walk or shame.”

She and friend Blac Chyna also attended the 2015 MTV Video Music Awards in matching outfits that again called attention to the negative labels they’ve had thrown at them because they’ve been romantically linked to hip hop artists.