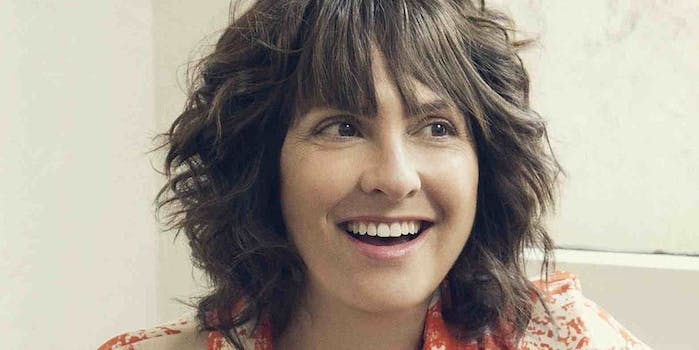 It's definitely not like anything you'd see on an NBC lineup.

BY RAE VOTTA AND NICO LANG

At this year’s OutFest, the cast and crew of Amazon’s Transparent presented a retooled version of the show’s pilot, set to debut with the rest of the series in September. Created by Jill Soloway (Afternoon Delight, Six Feet Under), the show focuses on a late-transitioning transgender woman (Jeffrey Tambor) struggling to come out to her “selfish” kids, played by Jay Duplass (The Puffy Chair), Amy Landecker (Enough Said), and Gaby Hoffmann (HBO’s Girls), who also won the film festival’s Best Actress award for her magnetic work in the indie horror film Lyle.

After screening the pilot, Soloway was joined by the aforementioned actors—plus castmates Melora Hardin (The Office) and Carrie Brownstein (Portlandia, Sleater-Kinney) and Zackary Drucker and Rhys Ernst, who acted as trans consultants on the show—for a Q&A. Here’s what we learned from behind the scenes of Transparent.

1) The team takes criticism of the show’s trans representation seriously.

During the panel, creator/writer/director Soloway fielded a question from the audience noting “disappointment” from the trans community at the idea of yet another cisgender male playing a transgender woman (à la Jared Leto in Dallas Buyers Club). It was a tense moment and clearly an emotional issue for Soloway, who noted that, for the show, the story of Moira (played by Jeffrey Tambor) is just the tip of the iceberg in telling a wider story about the community. Like Jenji Kohan’s Orange Is the New Black, Moira is just a trojan horse.

Tambor (for whom Soloway said she wrote the part) aside, the show boasts 12 speaking roles for transgender actors, meaning that an overwhelming majority of the show’s transgender characters will be played by actual trans people. In addition, Soloway mentioned that the show has set up a program to get transgender hires at every level on set, from the writers’ room to tech, in order to get trans workers employed. There are so many trans crew members that Soloway joked that they occupy “the cool kids table” on set.

2) It’s paying attention to the “forgotten B” of LGBTQ.

Soloway was quick to point out that the show features a lot of bisexuality. “Forget the forgotten T. Where’s the forgotten B?” she challenged, stressing that characters in the show explore many aspects of their sexualities. In the pilot, Moira’s daughter (Sarah, played by Amy Landecker) begins an affair with an old college girlfriend (Melora Hardin, Jan of The Office), despite being married with kids. From the get-go, Transparent sets up the narrative to be not just Moira’s story but also the story of a family and a community.

In bringing Moira to life, Jill Soloway stressed the amount of research and care given to her story—which, for Soloway, included meetings with trans author Jenny Boylan (a consultant on the show) and reading Julia Serano’s Whipping Girl, a seminal text on trans representation.

But no amount dedication was more important than Jeffrey Tambor’s, a comedic actor previously known for his work on Arrested Development and The Larry Sanders Show. Soloway thought he was crucial to the show’s audience appeal (comparing him to “America’s dad”), and during filming, he proved his own commitment by wearing a woman’s ring everywhere he goes, as a reminder of Moira.

Tambor noted that once at a bank, the cashier was checking him out and noticed the ring while counting money. The cashier paused for just a second and went back to what he was doing. It was a small moment, but for Tambor and his character, those moments mean everything.

4) They’re excited to be as unlikable as possible.

In fact, they think the term “unlikable” is actually a good thing; to the cast, unlikable means “something that makes a cisgender, white, straight man uncomfortable,” as Soloway memorably quipped. Star Gaby Hoffmann pointed out that tons of “asshole” white male characters get no flack for being unlikeable, citing Mad Men’s Don Draper and Breaking Bad’s Walter White—they’re just called antiheros. “I fucking hate those people,” Hoffman blurted out, before concluding, “So we’re a little whiny. We have pussies and are a little whiny. America, can you handle it?”

In traditional setups, if a show is made into a pilot and not picked up for a series, all hopes for it die there. The network owns the show and won’t let it continue. However, Soloway revealed that Amazon Studios offered an unexpected deal—if it didn’t develop the series, she could take it back. She listed that as one of the defining reasons she’s happy bringing her show to air with Amazon.

Although the cast noted negative experiences with network television—like not being chesty enough to play Adam Carolla’s ex-wife on an NBC sitcom—Amazon has given Soloway and her cast an incredible amount of freedom in telling this story the best way they know how. Perhaps this is why parts of the pilot feel like almost nothing else on television, unfolding more with the precision of an independent film (à la Nicole Holofcener) than anything you’d see on NBC’s lineup. This is because for Amazon and Transparent, it’s more than television. It’s life, told 30 minutes at a time.