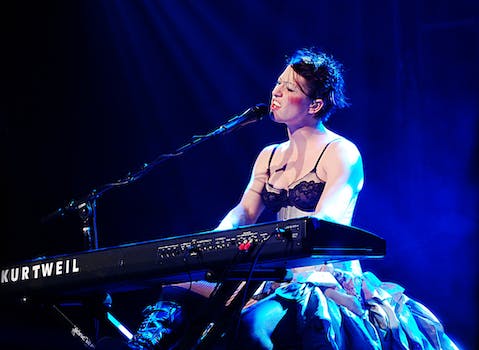 After coming under attack for recruiting volunteer musicians to play on her Kickstarter-funded tour, Amanda Palmer wrote that she has decided to compensate the fans who want to play horns and strings for her.

After a public outcry from fans and fellow musicians alike, musician Amanda Palmer will now pay the fans she recruited to join her band during the current tour.

Palmer initially promised to compensate “professional-ish” horn and string players who wanted to join her onstage with a combination of beer, hugs, and high-fives, but following a backlash led by a Seattle musicians’ union and famed producer Steve Albini, she announced on her blog Wednesday that she’ll now pay her volunteer musicians in actual money.

Palmer wrote that while the angry response she generated “sucks to read,” she feels that’s the “cost of being transparent.”

“[T]he fact that we all have access to each other and CAN discuss this stuff in realtime is what has MADE my success possible, even if it means i’m tied to the stake every once in a while,” Palmer wrote. “[I]’ll take it.”

Palmer had the most successful music project in Kickstarter history; her project had an original goal of $100,000, but by the time it ended, she raised almost $1.2 million. She outlined what she planned to do with the money, which included five music videos, paying staff and crew to design the album and the cost of tour venues, among other things.

Because the Kickstarter campaign was a runaway success, many fans were surprised when Palmer made an open call for volunteer musicians for her Grand Theft Orchestra tour on her official blog in August.

“I have learned that you raised a million dollars through kickstarter,” Chris Siebert, a professional musician who’s been touring for 23 years, wrote. “That’s a lot of money. And the best you can do is come up with a scheme to take advantage of desperate musicians by reinforcing everything that’s wrong with the music business and the modern American economy?”

Palmer originally responded to the criticism in a blog post on Sept. 14, where it turned out that the money she received from Kickstarter couldn’t cover everything.

“[I] could tell you that i wish i had enough money to hire a second tour bus and put eight full-time musicians on salaries, but the funny thing is: i actually don’t,” Palmer wrote.

A few days later Palmer backtracked on her previous statement. She started paying musicians three shows ago, according to her blog. She also acknowledged concerns and stated that she welcomes all feedback.

“[I] really appreciate those of you who came to the table and made your voices heard,” Palmer said. “[D]espite a few of the haters who were just along for the fun, i really value your various points of view, and into conveying your thoughts—even if we don’t all agree.”