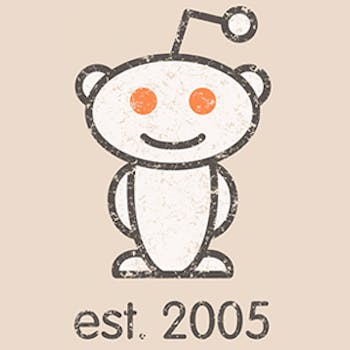 My, my Reddit, how you’ve barely changed at all in seven years.

Beyond a big name change, the social news site’s design has stayed largely static from 2005.

The biggest change? In the site’s first incarnation it wasn’t named Reddit. Ohanian and his cofounder, Steve Huffman, called it Snew—short for “it’s new.”

Eventually Ohanian and Huffman dropped “Snew” (probably for the best, it sounds like some bodily function, or some newly-discovered rodent species) and switched to Reddit—Ohanian has said he hoped people would say “I read it on reddit.”

“To the best of my knowledge,” Ohanian told Inc. Magazine in last March, “that has never really happened.”

Shortly after the name change, Reddit’s trademark pastel-blue ladder of links begin to appear. And truth be told, there’s not much else to Reddit’s minimalist design.

The Reddit alien has remained the site’s one true constant from the Snew days on.

“I was bored in marketing class my senior year of college at [The University of Virginia] and doodled the alien in the margins of my notebook,” Ohanian wrote in a Reddit thread last year.

The alien’s name, by the way? Snoo.