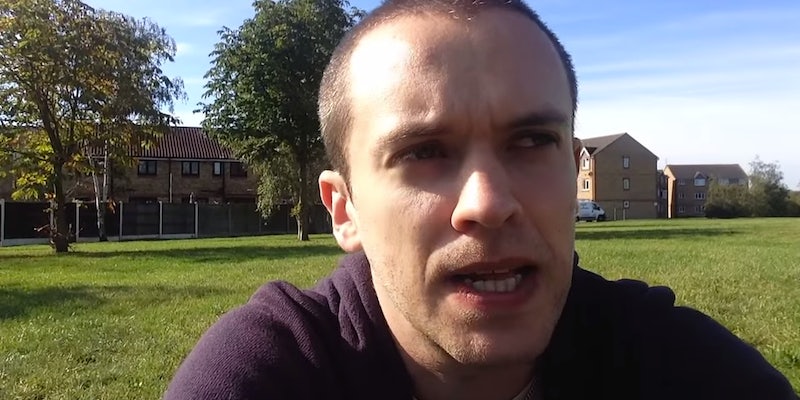 He's telling his side of the story more than six months after 14 different women came out with allegations against him.

Sitting in an open field, that’s how Alex Day—a YouTube musician who’s largely avoided the Internet ever since no fewer than 14 women accused him of emotional manipulation, coercing them into sex, or, in some cases, sexual assault—started out his first video in months (aside from a vlog talking about turning 25) to tell his side of the story. The video comes only days after a new wave of accusations against British YouTubers Sam Pepper and Jason Viohni came to light.

Like Ed Blann (a.k.a. Eddplant) before him, Day has refrained from making videos after the backlash against many of his former friends and supporters; Day’s last big update was posted seven months ago. He has argued in the past that he and Blann have a right to make YouTube videos and that fans should ignore the allegations against Blann; he also commented on Reddit that he’d written a post that denied doing anything without being 100 percent sure there was consent yet “a million other people chimed in and refused to accept that.”

But now, he’s posted a 31-minute, mostly unedited video titled “The Past.” If you would rather not watch it, there is a transcript available.

He spends part of the video preparing for the backlash and admits he’s afraid of Tumblr‘s response—saying the community there is “militantly liberal and intolerant of anyone else who doesn’t share their opinion.” He then goes on to explain in detail his perspective of one of the allegations in question, saying he never intended to make anyone feel pressured to do anything they weren’t comfortable with, but adds, “ultimately, if that’s how they felt, that’s how they felt.”

15th minute of this video is all he needed. “I acknowledge my mistakes. I was wrong. I can only hope to never make them again” #NotThePast

He invalidates two claims of the dozen-plus claims, saying the allegations are part of a broad spectrum but have been largely lumped together under the umbrella of emotional abuse and sexual assault. Near the 15-minute mark, Day apologizes, saying all he can do now is “learn from it … and make sure I don’t ever put anyone in a situation like that ever again.”

“I feel like that’s maybe all I have to say on that. It won’t be enough for many people,” he said. “You have to understand if you’re someone that thinks that all this is reasonable and that you’re grateful that I’ve told my side of the story or whatever… you must understand there are still gonna be many, many people in the world that don’t think this is good enough and that don’t even think I should be allowed to say how I feel and that it’s disrespectful and upsetting to the victims.”

Day’s attempt to explain himself months later was predictably met with backlash on Twitter, and the mixed reactions came swiftly, even though Day said himself in the video that he’s not going to read the comments.

Alex Day’s timing STINKS of “well if I say sorry now, I wont look as bad as Pepper & veeoneeye, because I only used EMOTIONAL manipulation”

I haven’t watched Alex Day’s new video with presumably fake apologies and woe-is-me’s; I’ve been too busy doing anything else.

I watched all 30 mins of Alex Day’s video. I’m not convinced of any development & I don’t agree with his choice to continue making videos.

.@thatalexday if you’re trying to claw your way back onto YouTube you really could’ve picked your timing better.

Lex Croucher, who wrote about cutting off ties with Day after he ignored her refusals to do anything with him, stated bluntly that “abusers aren’t welcome” on YouTube and reiterated many of the things she experienced during their friendship. Since speaking out again, she’s received nasty comments from Day’s supporters.

Alex Day has apparently uploaded a new video. I’ve said it many times, but I’ll say it again: abusers aren’t welcome in this community

I experienced years of being manipulated, treated like shit and pressured by Alex, and remember – there are much much worse allegations.

In a recent video, Lizzie Howard worried that the alleged YouTube abusers are “suddenly going to have an online presence again” despite having “lost the right to use social media when [they] abused it and used the power [they] got from it to abuse others.”

The Nerdfighter community on Reddit is torn about how to take the video. Some are happy to see Day online again, while others aren’t exactly sure how to feel or what to believe.

“I think he seems pretty genuine here,” sitrucneb wrote. “A bit nonchalant for my liking, but I suppose that’s his default setting. But I’m glad he at least put his side of things out there, even if half of us choose to cite it as proof of how manipulative he (supposedly) is.”

YouCoalition, the task force set up by the Vlogbrothers to “combat sexual abuse, emotional manipulation and other forms of violence in the YouTube community,” condemned Day’s return to YouTube, calling the video manipulative and telling readers that it shouldn’t change their mind about how they feel about him or what he did.

“By making himself the victim of this situation, Alex’s statement becomes a sympathetic one,” the coalition wrote. “It is true that humans make mistakes, but that does not mean that Alex should be welcomed back into this community, trusted, or given any kind of respect on this platform.”