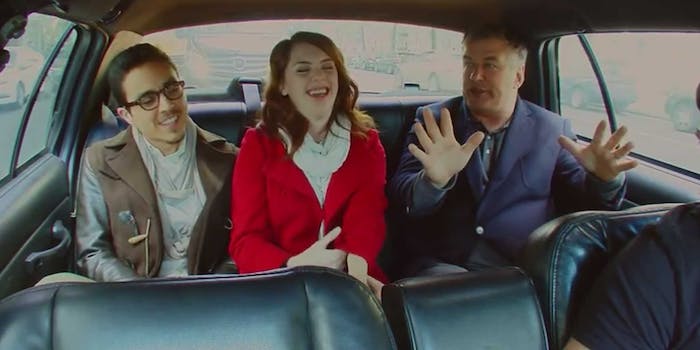 Watch out, couples: Alec Baldwin is on your case.

When you think of relationship experts, Alec Baldwin probably isn’t the first person who springs to mind. His marriage to Kim Basinger ended in acrimony and off-screen he comes across as somewhat temperamental and unusually combative .

Baldwin’s utter inadequacy for the role of love guru might be the reason why he’s relegated to dispensing advice from the back of a cab, which is where we find our self-confessed “Internationally Renowned Relationship Expert” in the weekly webseries Alec Baldwin’s Love Ride.

Baldwin, who spends each episode peppering his guests with questions as comedienne Paula Pell rides shotgun, is the first to admit to his shortcomings. It is his hope, he says, that he can prevent the couples he accosts from “avoid[ing] some of the mistakes I have made.”

It’s here where Baldwin’s appeal shines through: He is quick with his wit, although editing certainly helps. When his first guests, Corey and Francesca, reveal their ages, Baldwin immediately—”just to lay the cards at the table”—zeros in on how when Corey was “right around 25 [he was] jamming on some 19-year-old girl.”

It’s easy to understand why Baldwin has gotten into trouble in the past. In the series, he delivers most of his comments and questions in a combative tone: “You want to have kids? Why?” he barks almost accusingly at Toby and Brian, who are now married but met on Grindr.

Despite Baldwin’s blunt gruffness (“Hetero-normative? Do you work at the New Yorker? Are you a fact-checker?”), there’s something fitting about his disheveled appearance. His advice and sentiments eventually come across as well-meaning and sincere. After his interrogation of Toby and Brian, Baldwin, who seems satisfied with their answers, calls them “awesome”.

The appeal of Love Ride is the chance to watch Baldwin playing off-the-cuff like this. Although this series isn’t as high profile as his other work, it’s still a risk: Not every star has the charisma to pull off this kind of one-man spectacle. As the back-seat love doctor, however, Baldwin is right in his element.