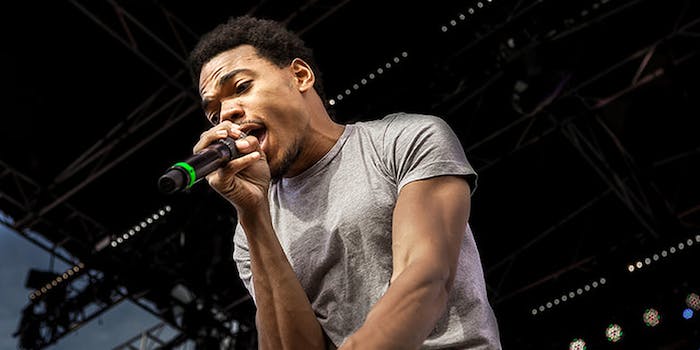 Alec Baldwin gives rapping a shot with Chance the Rapper

Baldwin is 'for the people.'

When Chance the Rapper isn’t covering the theme to PBS kids’ show Arthur or teaming up with Mark Ronson, he’s beatboxing with Alec Baldwin.

Over the weekend, the rapper posted a video to his Instagram showing Baldwin rapping the words to Carl Sandburg’s poem “Chicago,” while Chance beatboxes. The two were apparently both in Chicago for a Young Chicago Authors event, and, as Chance relates, Baldwin is “for the people.”

This is me beatboxing while Alec Baldwin raps, he is for the people. Him, Alfred Woodard and Ali from Tribe came thru the city to help raise money for YCA, the organization that built and developed myself and @Malcolmlondon into the leaders we have become. Give it up for them. Beautiful leaders we can all learn from #Chicago #LongLiveTheYoung #YCA

Baldwin needs to work on his flow a bit, but we’ll applaud his effort. Sandburg’s poem is really beautiful, and here’s the passage he’s reciting if you can’t make it out:

…for I have seen your painted women under the gas lamps luring the farm boys/And they tell me you are crooked and I answer: Yes, it is true I have seen the gunman kill and go free to kill again.

Me and @chancetherapper were ON FIRE TONIGHT.
Like…a serious….you know…burnin'…FIRE!!#LOUDERTHANABOMB

In other rapper/actor chill sesh news, Bill Murray and Rick Ross also hung out this weekend.