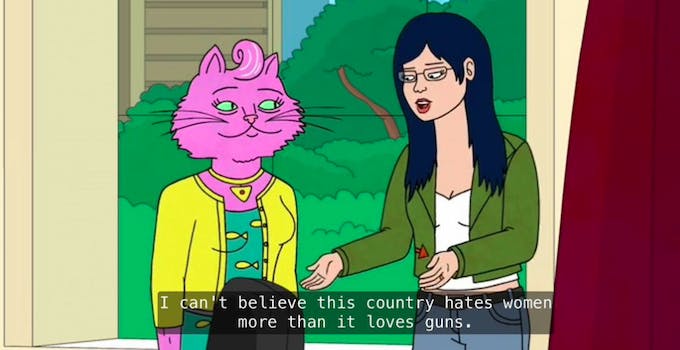 The most recent season of Bojack Horseman featured an episode, “Thoughts and Prayers,” that has proved extremely prescient as America’s mass shooting epidemic has accelerated under President Donald Trump.

In it, mass shooting after mass shooting happens again and again and nothing is done. But as women start to arm themselves for protection thanks to an article written by Diane, a woman commits a mass shooting and suddenly California passes legislation to ban guns.

Since the shooting in Parkland, Florida, a proposal by Trump to arm school teachers has gained unceasing momentum, as conservatives have latched onto the idea.

But one Republican in Alabama suddenly noticed a problem. Some teachers are women. And women are “scared” of guns.

Rep. Harry Shiver (R) told AL.com that the idea to arm teachers was flawed because “our ladies” need to be protected, not armed.

“I’m not saying all (women), but in most schools, women are (the majority) of the teachers,” Shiver said. “Some of them just don’t want to (be trained to possess firearms). If they want to, then that’s good. But most of them don’t want to learn how to shoot like that and carry a gun.”