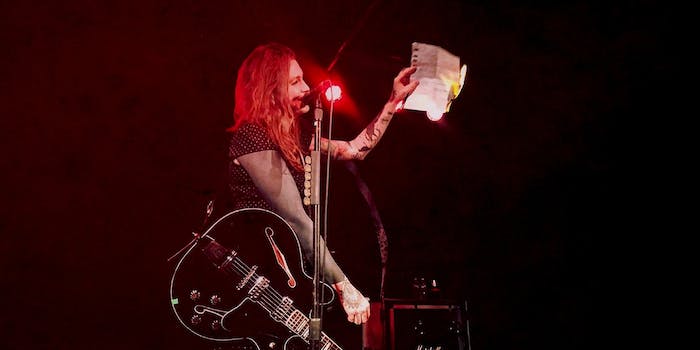 A handful of musicians and bands have canceled shows in North Carolina to protest House Bill 2, which dictates that people must use the bathroom that corresponds to the gender on their birth certificate. Last night, Against Me! frontwoman Laura Jane Grace found an incendiary way to protest the transphobic bill.

At a show in Durham, North Carolina, Grace, who is trans, kicked off the gig by burning her birth certificate on stage. A fan captured this video, in which Grace declares, “Goodbye, gender!”

Reporting live from North Carolina, have found the actual #hb2 as drafted by @patmccrorync

Last month, she told BuzzFeed that while some musicians like Bruce Springsteen are boycotting the state, it’s more personal for her:

I think the real danger with HB2 is that it creates a target on transgender people specifically. When you feel targeted as a trans person, the natural inclination is to go into hiding. But visibility is more important than ever; to go there and have the platform of a stage to stand on and speak your mind and represent yourself.

She followed through on that last night, telling the crowd that “the way you affect change is by empowering the grassroots movement.” Grace has been very active in raising trans visibility, hosting the AOL webseries True Trans and, more recently, explaining the divisive title of her upcoming book.

In an interview with the Washington Post, she points out that this isn’t just about bathrooms, though:

The U.S. Justice Department is currently suing the state of North Carolina for violating LGBT rights and the Civil Rights Act of 1964.