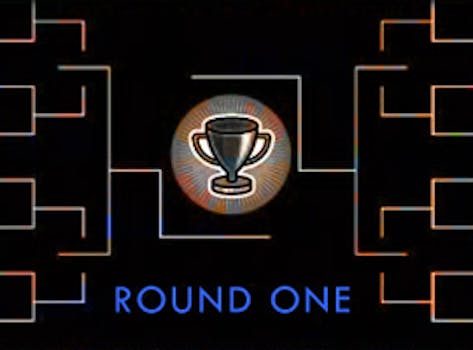 After an Entertainment Weekly TV poll snubbed a popular gay relationship, fans who want to see male characters together on their favorite shows got a poll of their own from After Elton. Hundreds of thousands of votes have already been cast.

It’s been a huge summer for Sterek fans.

The fanbase of the slash pairing of Derek/Stiles from MTV’s summer hit show Teen Wolf has been tooting its own horn better than anyone else lately. Certainly better than Entertainment Weekly when the magazine inexplicably disallowed the pairing from its summer poll of favorite ships, despite thousands of votes and comments.

Teen Wolf fans howled so loudly over the snub that they shut the whole poll down, and garnered two new ones in their favor: Queer pop culture websites After Elton and After Ellen are hosting slash and femslash-only pairing tournaments just for shippers.

Now Round One of the slash tournament has begun, and Sterek shippers are finally getting to have their day in the sun.

Though the voting only started yesterday, Sterek already has over 140,000 votes. Its competitor, Vampire Diaries duo Damon and Alaric, never stood a chance.

But that’s not the only huge turnout for beloved pairings, such as Harry Potter‘s Harry/Draco and Star Trek‘s Kirk/Spock—which was paired against the alternative universe version of itself for the first round.

Similar logic held for pairing off House/Wilson with Johnlock, since both are alternate universe versions of Sherlock Holmes and John Watson. Unsurprisingly, the currently popular Sherlock is rousting the once-popular House, which ended its run last year with House and Wilson literally riding off into the sunset together.

The polls do hold some surprises, though, like eternal underdog Community’s Troy/Abed even making an appearance at all—though with moments on the show like this, it’s no wonder. Then there’s the barely-there-in-canon pairing of Arthur/Eames from Inception making a showing, the only stand-alone film pairing to make the list. With 25,000 votes in its favor, it might just have a chance.

Meanwhile, a truly epic battle is playing out between rival Supernatural pairings Wincest and Destiel. With over 300,000 votes cast, Destiel has a solid lead. This is something of an upset. Wincest, the illicit pairing of brothers Sam and Dean Winchester in a “so-wrong-it’s-right’”romance that the show itself has often cheekily alluded to, has been a hugely popular pairing all along. Destiel (the pairing of Dean and the angel Castiel) only became a phenomenon with the addition of fan favorite Mischa Collins to the show, several seasons in. 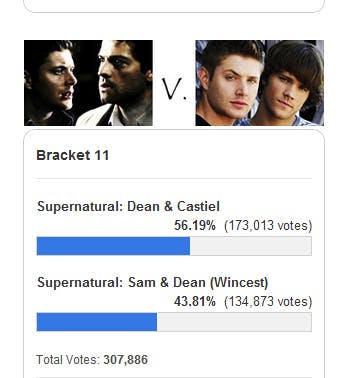 Still, the polls are open until midnight on , so anything could happen. “It doesn’t come as a surprise that so many people are voting and voting so ferociously,” Suaine, who is a fan of multiple pairings on the ballots, told the Daily Dot. “The only thing that surprises me is that it hasn’t caused any major fandom explosions yet.”

She added that the After Elton poll is indicative of the ongoing mainstreaming of fandom:

“Right now, [given] the push for these pairings to become canon and the insistence of the new generation of slashers that this is something that should be normal, [slash fans and queer communities like After Elton] might be able to help each other.

And as someone who is part of both the queer and the slash community, I can’t wait for the day that the genders of a popular couple on TV is not the deciding factor in whether or not the writers/producers ever acknowledge the pairing.”

For the moment, fans are just happy to root for their favorite pairings on a major media site that embraces all forms of shipping—slash included.

Photo via After Elton