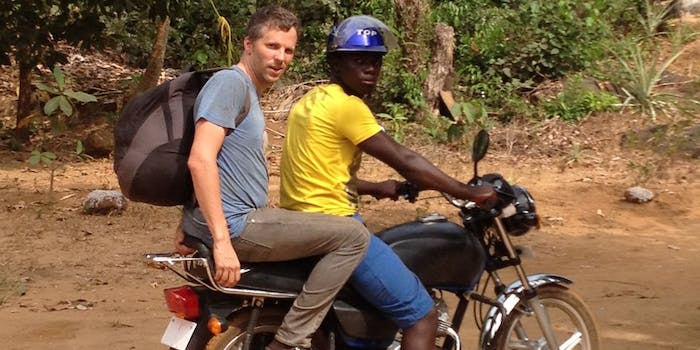 In Africa, memory cards are the new cassette tapes

With access to the Internet limited and prohibitively expensive, cell phones are a cheap alternative for storing and sharing information. Africa also has a higher rate of mobile use than either the United States or Europe, having grown 40-fold in the last decade.

Just as the Sony Walkman helped give rise to a mixtape culture—trading tapes and bootleg copies of albums or live recordings—an independent scene has emerged with microSD cards. Tracks are traded from one phone to another via Bluetooth connections or card readers.

“In much of West Africa, cell phones are are used as all purpose multimedia devices.” noted Chris Kirkley of Sahel Sounds, an independent record label, based in Portland, Ore. “In lieu of personal computers and high-speed Internet, the knockoff cellphones house portable music collections, playback songs on tinny built in speakers, and swap files in a very literal peer-to-peer Bluetooth wireless transfer.”

Kirkley has been collecting music from memory cards on mobile phones in the Sahara, including Mali and Senegal. In 2010, he released a stellar compilation LP, Music from Saharan Cellphones, that captured not only the music that was popular on  “the unofficial mp3/cellphone network from Abidjan to Bamako to Algiers” and nomadic desert renegades Tinariwen. It’s been recently released digitally.

For Kirkley, the distribution represents a cultural reclamation of the music, an independent system by and for the people.

“The ubiquity of cellphones has created a busy soundscape,” Kirkley told Motherboard. “There a furious outcry by these corporate machines who based their business on distribution and propagation, but it’s just the sound of a system in its death throes.”

For those who are skeptical about the media being the message, it’s important to note that SanDisk thumb drives were crucial in Cuba some years back. Those devoted to publishing their thoughts online would type up what they wished to say on their unconnected home computers, walk into a tourist hotel (where they were not legally allowed to be), and plug into one of the hotel’s business center computers to post from there.

In fact, in West Africa, the use of memory cards is a symptom of an explosion of musical exuberance extravagant even for the region. There is so much music that expecting only one distribution channel would be “kind of like trying to pour a bottle of Coke into a straw,” according the Wall Street Journal’s West Africa correspondent, Drew Hinshaw.

“Channels of distribution are flourishing in much of Africa,” Hinshaw told the Daily Dot. “USB sticks, cheap smart phones and the like. It feels to me that African pop music is bubbling up right now — finding a humorous, sometimes sinister electro cool voice—and maybe because the channels to circulate little hits are flourishing.”

Just after his 40th birthday, Offer took a month to travel through Senegal, Gambia, Guinea, and Sierra Leone, he told the Daily Dot.

In West Africa, “absolutely everyone is listening to music on their phone,” he said. “The phone is everyone’s new boombox or Walkman.”

Being a musician, Offer wanted to get some of the music that was so ubiquitous on his trip. The concierge at his hotel told him to get a memory card, because “that’s how things were done, that’s how music was sold.” He walked Offer to a cell phone kiosk and the proprietor sold him 100 “hits,” which he burnt, as it were, onto an SD card, as well as a small radio that played those cards.

For Okayafrica’s Africa in Your Earbuds series, Offer created a mixtape of 14 of those tracks (along with a bonus track written by him and Sierra Leone musician Daddy Rhymes). Some of these tracks remain unidentified, since memory cards often carry little or no track information.

WiIth less genre-specific organization, buying and selling music from card to card gave Offer the vibe he often gets when he picks up an old cassette mixtape from a thrift shop.

Those thrift shop tapes “by some 15 year old kid will have the Dead Milkmen next to Pet Shop Boys and PiL,” he said. “I figured my ignorance of African genres would make for an interesting mixtape.”

It does. And, given how little actual remixing he did, it gives the listener a real window not only into the vibrant and upbeat West African music scene but the way in which music moves through the culture there.