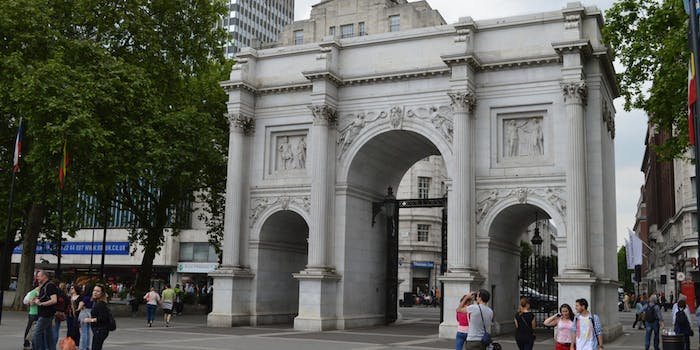 Things quickly got out of hand.

The fact that “virtual celebrities” can draw real-world crowds was illustrated in London this weekend, as YouTube star Adam Saleh was mobbed by hundreds of fans—eventually forcing the police to intervene.

Saleh is one half of popular YouTube prank channel TrueStoryASA, along with Sheikh Akbar. The duo had organised a “meet and greet” at Marble Arch in London, but became overwhelmed by the crowd and were unable to leave.

Surrounded by over-excited fans, the police stepped in to escort them to safety, prompting Saleh to take a tongue-in-cheek selfie from the back of the police car:

London police arrested me! You guys are crazy! Please be safe ! :( pic.twitter.com/gSxPwM5fMn

London newspaper The Evening Standard quotes a police spokesperson as saying: “Police were called at approximately 3.15pm on Sunday to Marble Arch following reports of a large gathering after an event was advertised on social media.”

“Officers attended and found a 21-year-old man unable to leavee the Palazzo area,” the statement continues. “He was escorted away by police and taken to a central London police station where he was offered advice regarding organising large-scale events. He was not arrested.”

The drama didn’t stop there, however: Further meet-ups were organised in since-deleted tweets. “Police were called at 5.45pm on Sunday to a hotel on Harrington Gardens after a large crowd attended and tried to gain entrance,” the police spokesperson adds. “Officers remained on scene and assisted hotel security. The crowds dispersed at about 7.40pm. There were no arrests.”

It appears that the hotel failed to see the funny side of the Internet joker’s poor organisational skills: He subsequently revealed on Twitter that he’d been summarily ejected from the premises.

Apparently none the worse for wear, Saleh is revelling in his momentary notoriety, posting a photo of the Evening Standard article on Instagram.

“[They police] didn’t save me,” the caption reads. “I wanted to stay! love you London!”