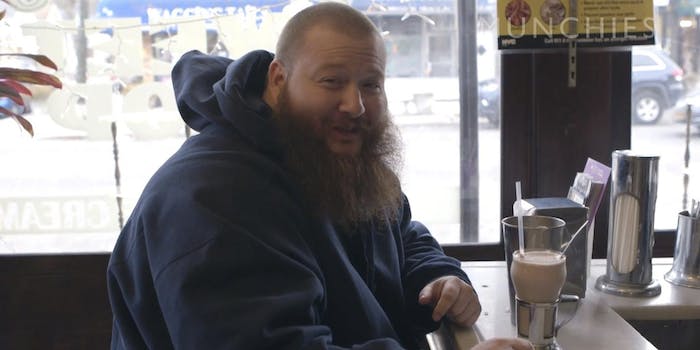 Action Bronson’s milkshake brings all the fans to his webseries

Fuck, That's Delicious is a natural extension of the rapper's musical output.

Another day, another crossover food project by a hip-hop artist. But could this one be the cream of the crop? Meet Fuck, That’s Delicious.

What separates Action Bronson’s new webseries from the culinary efforts of his rapping contemporaries? For one, it’s neither a cheesy add-on nor a midlife crisis (sorry, Coolio); the series actually feels like a continuation of his musical output. You need only to read the titles to some of his tracks (“Ceviche”, “Jerk Chicken,” and “Roasted Bone Marrow”), check his mixtape, or pay attention to the opening scene of the music video for “Brunch” to realize that the time spent in his family’s restaurant and as a sous chef has always fed his rhymes.

But it takes more than just a passion to make a spin-off like this palatable to a cynical public. So it isn’t a surprise to find that the highlight is not the food featured in the first episode of this monthly 10-minute series (which all looks great, but frankly, so it should): Rather, it’s the same charisma that has driven Bronson’s ascendence in rap.

Look no further than his interview with Nardwuar, where he crosses seamlessly from recommending a Korean restaurant in Flushing (“right across the street from the library”) to opining on the E. coli risk of pre-bagged salad—the Mexican pickers, you see, angry at America “wipe it across their grundle … put it on their assholes”.

Now I don’t know whether that’s true, but either way, he’s effortlessly funny, and Bronson’s tendency to jump quickly from the profound to the profane is placed front and center in Fuck, That’s Delicious. It is layered for such a short show, featuring footage from a past tour and Bronson’s reminiscences on favorite haunts in his hometown. He visits Eddie’s Sweet Shop in Queens to have a vanilla and chocolate malt milkshake; he confesses his eager anticipation is “fucking sad.” But it’s nostalgia that’s the major draw: “I come here to feel like a child again,” he says.

It may seem that a natural progression for future episodes land Bronson behind the stove, but he’s already done something similar before, and it’s debatable if he’s any better a cook than any old person with a camera phone.

As a food tourist, however, Bronson is peerless. Hopefully Fuck, That’s Delicious continues to find him at his best.