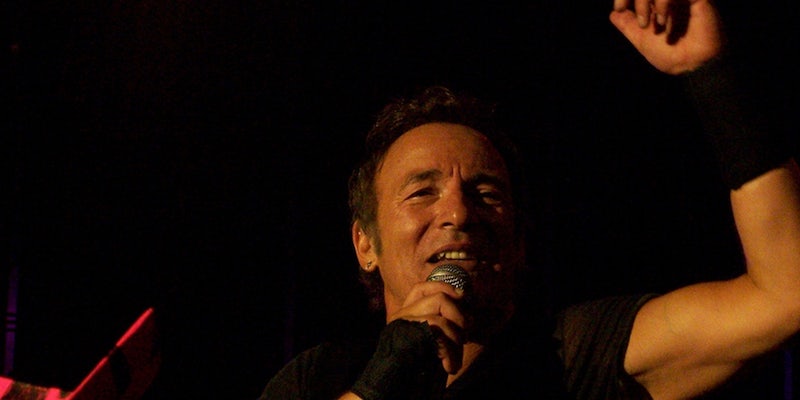 Baby, we were born to run a periodical of stadium rock scholarship.

The feverish fandom surrounding rock idol Bruce Springsteen—middle-aged men at his concerts have more than a little in common with the hysterical tweens who fawn over One Direction—has given rise to essay collections, academic conferences, and in short, a thriving subculture of Boss-based scholarship. Soon enough, we’ll have a highbrow periodical devoted to nothing but.

BOSS: The Biannual Online-Journal of Springsteen Studies is, quite simply, an “open access academic journal that publishes peer-reviewed essays pertaining to Bruce Springsteen.” Most members of the well-credentialed editorial advisory board have backgrounds in the humanities—psychology, music, literature, history—but the project encourages a freestyle, interdisciplinary approach to Springsteen’s work and mythos.

“The goal,” according to managing editor and University of Virginia Ph.D. history student Jonathan D. Cohen, “is to provide a stable home for Springsteen Studies,” one that will inspire further work and allow writers to plumb his all-American guitar anthems without tailoring their essays to the needs of a broadly focused magazine. “We’re at the right time here,” Cohen told the Daily Dot by phone. “The kids who listened to him in the 70s and 80s, some of them grew up into academics.”

Springsteen himself, Cohen noted, has often repeated the mantra “trust the art, not the artist,” but his themes of class identity and politics, matched with a meticulously combed-over personal narrative, makes closer analysis irresistible. “Every detail of his life is borne out in the work; you can say that ‘Independence Day’ is about the troubled relationship with his father. With all we know about him, we can better see the creative process.”

“He’s aware of the community,” Cohen said when asked about Springsteen’s relationship with fans. Ideally, however, BOSS would also open the field to less-obsessive scholars who might not have otherwise delved deep into this material.

While the first issue is already filled, possibly with the work of editors such as Eric Alterman, an avowed acolyte who has already published a expansive Springsteen biography, BOSS is still looking for new stuff. Just put together a 15-25 page article that touches upon Bruce’s singing, songwriting, or fan community and conforms to The Chicago Manual of Style. (The Asbury Park edition is considered unprofessional for some reason.)

The publication could certainly be a boon to those of us who struggle to parse the typical Springsteen lyric. It could revolutionize the way we think about American flags and bandanas. And if its aim of securing “a place for Springsteen Studies in the contemporary academy” sounds a touch grandiose, well, that seems in keeping with the spirit of the Boss himself.