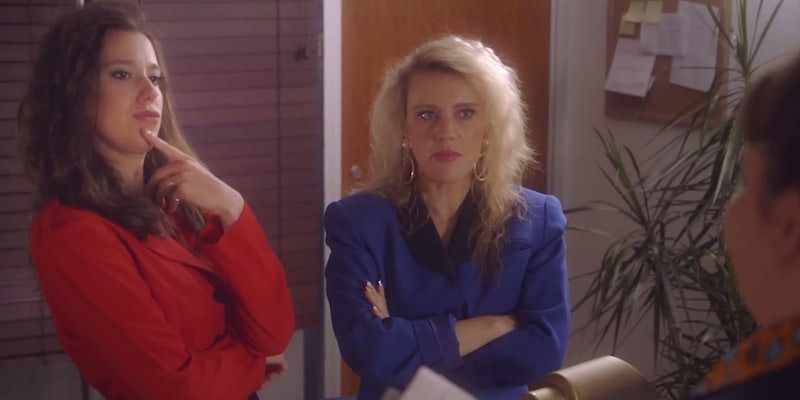 Above Average has the cure for 'SNL' withdrawal.

This season of Saturday Night Live feels like it’s turned a corner. Sure, there are still clunker sketches, but the show’s gotten more diverse (when’s the last time SNL could spoof an all-black Game of Thrones?) and has more players who are pushing boundaries.

Here are a few webseries from SNL players you should be watching.

Are you excited about Hillary Clinton’s run for president mainly because it means more of Kate McKinnon’s impressions? Us too. McKinnon has quickly become SNL’s human roulette wheel of weird and wonderful characters, filling the void left by Kristen Wiig’s departure. In the new Above Average webseries Notary Publix, which can also be seen on IFC, she and (real) sister Emily Lynne play notaries Gina and Theresa Fra Diavolo, who take their job very seriously. SNL’s Aidy Bryant stars as the sisters’ notary rival, Erin Oatmeal, and yes, there’s a scene in which a notary demon possesses Lynne.

SNL’s Sasheer Zamata and Girl Code’s Nicole Byer anchor this webseries about best friends in New York City, and Above Average just released the second season. In the latest episode, they discuss the sexual nature of the apple (and the banana and the cucumber) in an amazing montage. Never forget: Zamata’s also responsible for this perfect sketch about street harassment.

Vanessa Bayer’s character on Sound Advice, Janessa Slater, is an oblivious “media coach” who attempts to help artists like Weird Al, Demi Lovato, and Drake sort out their PR issues by giving them the worst advice possible. This interview with Sleater-Kinney needs to be an hour longer.

Before Kyle Mooney and Beck Bennett were on SNL, they starred in this offbeat webseries about three roommates. It’s not an Above Average joint, but it’s still very weird and heavily informed by their improv backgrounds, as witnessed in this dinner sketch. If Mooney’s JNCO-clad SNL character “Chris” looks familiar, it’s because he was born on Good Neighbor. You can watch all the episodes on YouTube.