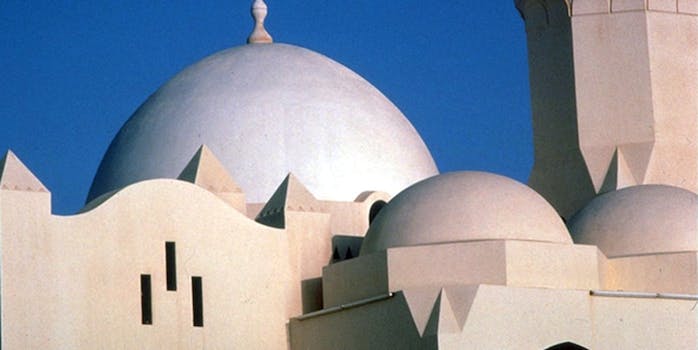 "I hope Alice in Arabia gets cancelled before it even airs..."

It’s almost impressive when a TV show manages to inspire this much loathing before a single episode has aired.

And we’re not even talking “disappointing adaptation of a beloved comicbook hero,” here. This is a completely original TV drama, by a new writer who doesn’t even appear to have an IMDb page yet.

According to the Hollywood Reporter, Alice in Arabia is the story of a rebellious American teenager who is “unknowingly kidnapped” by her Saudi Arabian extended family, ending up “a virtual prisoner in her grandfather’s royal compound.” She then has to “count on her independent spirit and wit to find a way to return home while surviving life behind the veil,” apparently.

Written by a former Army linguist who worked on NSA missions in the Middle East (seriously), this pilot concept has left many people wondering: What is ABC Family thinking? An Arab family kidnapping their American relative and keeping her in a walled compound? And forcing her to wear a veil? It practically seems like a checklist of Islamophobic paranoia buzzwords.

As soon as details of the show began to emerge online, ABC Family was inundated with tweets from people pointing out that at best, the pilot sounded like it was perpetuating some pretty racist stereotypes.

Alice in Arabia because we needed more misrepresentation.

alice in arabia, another example of how media perpetuates racist stereotypes. written by former NSA employee no less #ABCWhiteFamily

Spurred on by Pakistani-American writer Aisha Saeed and coverage from Al Jazeera America, the #AliceInArabia hashtag is now full of criticism about the various potential problems in the show’s basic concept.

Alice in Arabia’s writer Brooke Eikmeier already appears to have responded online, saying that the main character isn’t white and that the show is intended to give a voice to Arabs and Muslims on American TV. So far, this argument doesn’t seem to be making much headway, probably thanks to the unfortunate phrasing of the original plot summary on entertainment news sites.

A Twitter account in Eikmeier’s name has also sprung up, attempting to do some damage control in among the flood of tweets from people complaining to ABC Family. But considering the shakey ground of most TV pilots, things don’t look good for Alice in Arabia. People are clamouring for it to be taken off air before it’s even been on the air, and all the social media hullabaloo has led to some pretty negative coverage already.

We are hiring Arabs and Muslims as actors as well as cultural consultants. We are listening and interested. #AliceInArabia

@_arnesa_ I have experienced pain, rejection, people jumping to conclusions about me, hating me because of my uniform… I am human, too.

@Yousaf83 You haven’t even read it. That’s what’s crazy about all these assumptions and hate.

If you give Eikmeier the benefit of the doubt, it’s easy enough to feel bad for her. The plot summary that was released to sites like the Hollywood Reporter was probably written by someone at ABC Family, and no one has even seen an episode yet. It’s entirely possible that Alice in Arabia will be a sensitive and well-informed portrayal of Saudi Arabia and its culture.

However, Occam’s Razor suggests that a TV show written by a white American and former Army/NSA employee, about an American girl being “kidnapped” by a Saudi Arabian family and forced to “survive behind the veil,” is unlikely to be a great portrayal either of Saudi Arabia or of what American audiences will likely perceive as Islamic culture as a whole.

One thing’s for sure: if this pilot actually does end up being picked up for a full series, it will be under the microscope, and so will its writer.