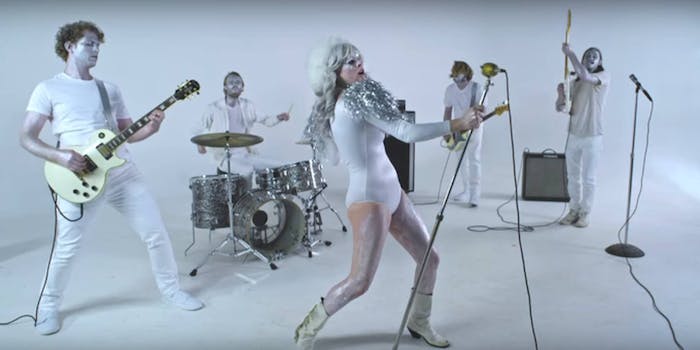 From six years of sweaty club gigs to the middle class realm of sustainable rock, A Giant Dog is hitting its stride.

A Giant Dog is in a good place. The Texas punks are signed to perennially credible Merge Records. Their new album, Pile, is out today after 23 months of dust and logistics. The band is even set to embark on a 22-date national tour this weekend.

But without the benefit of a Tidal exclusive or a Zane Lowe interview on Beats 1 Radio to signal an online arrival, the indie band had to do something special to get the word out about their third LP. For this, the punks decided to post the entire record to Bandcamp a week prior to its release.

“I can say that Bandcamp’s the only thing we’ve made money from aside from vinyl since we’ve started,” guitarist Andy Bauer adds. “It’ll probably be what we make the most money off of digitally.”

The Bandcamp stream goes dark next week. You’re welcome to stop right now and listen before it’s too late.

Pile is a speedy, shimmering glam-punk romp about sex, lost youth, and investing your 20s in a haze of marijuana smoke. Spoon’s Britt Daniel drops in to sing an acoustic ballad, lending the album even more heft. Ellis is surprisingly specific about its sonic parameters, describing the music as “Shaun White on a snowboard holding two tampons in each hand.”

Onstage, the band has the luxury of being even more powerful than that imagery implies. Ellis howls and storms with the urgency of a high school theater kid who can’t wait to graduate.

The five-piece band is talking after a rehearsal in North Austin, two days before Saturday’s release concert downtown at Barracuda. Ellis is vaping and enjoying her Snoop Dogg-edition pen; as the band’s larger-than-life centerpiece, she seems tired but sharp enough to quip.

“This is his signature pen so it’s got blue marijuana leaves and it’s just really deluxe. As we make this a career, I’m trying to be more career-minded,” she deadpans. “Since the Internet isn’t going to give us any money, we just follow Snoop’s lead as best we can: Do gangster shit to get money.”

Ellis notes that the way musicians thrive in the digital age is to feed their enterprise with licensing deals. And she’s clear that the band aims to land corporate sponsorships—“ideally somebody who makes video games or cookies.”

As for Bandcamp, the band members seem in universal agreement that it’s the choice digital medium for independent punk rock.

“It’s pretty reassuring to get emails like every couple of days, almost every day, about somebody purchasing [our] music,” bassist Graham Low says.

Singer and guitarist Andrew Cashen sums up the love best: “It’s a platform that people go to when they want to know that their money is getting back to the artist.”

According to Billboard, Bandcamp has paid artists $150 million throughout its eight-year history. The Sea Ranch, California-based music bazaar takes 15 percent of digital sales, and 10 percent of physical goods.

All things being equal, the band would prefer fans shelled out for the vinyl version of Pile. According to Bauer, it’s the most bottom-line surging transaction. He adds that Merge, a crown-bestowing label that’s worked with the likes of Arcade Fire and Bob Mould, began its promotional push for Pile three months ago. A Giant Dog is certainly not beholden to traditional metrics of success, however.

After holding out for “fair” record deals in the wake of 2013’s breakthrough second album, Bone, that gamble appears to have paid off.

“We were just really hard-headed and, in that way, we’re kind of entering it as a career with the groundwork laid for whatever happens to happen in a fair way,” Ellis says of the band’s partnership with Merge, before feeling self-aware about the business-minded answer. “I’m being boring,” she laments.

On Friday, Pile also landed on free streaming giant Spotify. Fans can skip the vinyl edition, or not bother to purchase a digital copy at all. The band feels a little weird about this but are more than happy to attract listeners no matter the price point.

“I had no problem with free music, there’s no other real way to get our band name out there,” Cashen says. “My opinion might change as we venture into this being a career.”