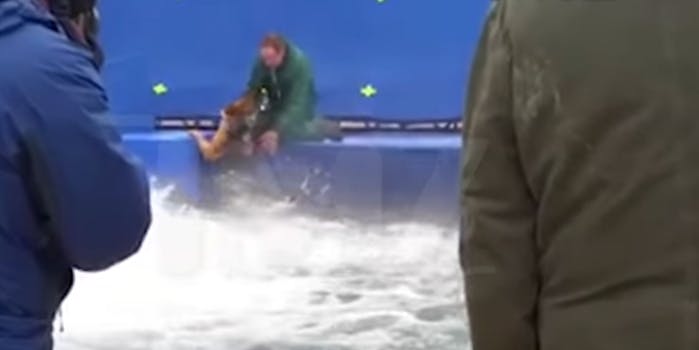 When a video taken from the filming of A Dog’s Purpose appeared to show a German Shepherd being mistreated, the footage went viral thanks to TMZ, leading to numerous boycotts of the film from PETA and other celebrities.

The premiere eventually was canceled, and the American Humane Association (AHA) representative who was on the film set at the time was suspended.

Now, the AHA, via the Verge, says the video was edited in a way to mischaracterize the events of that day and possibly do harm to the filmmakers.

The AHA released a statement Saturday that said a third-party, independent investigation has concluded that the videos were made by an “individual or individuals who captured and deliberately edited the footage, and then waited longer than 15 months to release the manipulated video only days before the movie’s premiere, rais[ing] serious questions about their motives and ethics.”

The AHA also wrote that the investigation has confirmed that no animals were harmed during the making of those scenes.

This was the video released by TMZ on Jan. 18.

The AHA concluded that the two scenes shown in the video were actually filmed at different times, the dog shown was never forced into the water, and that “a full spectrum of preparation and safety measures were in place.”

More from the AHA:

At the same time, American Humane believes that the handling of the dog in the first scene in the video should have been gentler and signs of stress recognized earlier. That being said, it is important to note that this was recognized and the scene did not proceed as insinuated by the misleadingly edited video. Although the dog was momentarily stressed, based on studying additional footage not included in the video, body posture, and the fact that he quickly and willingly went into the water and performed the scene soon afterwards, a separate, independent, board certified Veterinary Behaviorist brought in to examine the events concluded that there was “no lasting stress response or conditioned fear of the water as a result.” Eyewitnesses also report that following the water scene, the dog was wagging his tail and wanted to go back into the water.