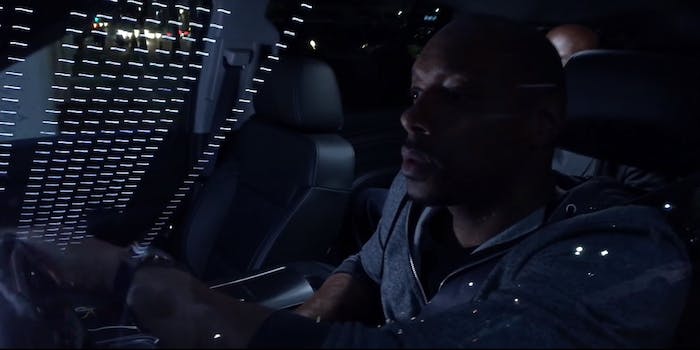 Screengrab via Matthew A. Cherry/YouTube

Get in the back seat with ‘9 Rides,’ a feature film shot entirely on iPhone 6s

It puts those videos of your cat to shame.

Sometimes you’ve just got to make do with what you’ve got. And when Matthew A. Cherry’s film fell apart because his female lead’s pilot got picked up, he wanted to move on, and fast. Realizing that with the iPhone 6s he could shoot in 4K resolution and inspired by Tangerine and Tom Hardy’s insular turn in Locke, he devised 9 Rides—a film with a legitimate claim to being a world-first.

“It was mostly out of necessity,” Cherry told the Daily Dot via email of the film. “We had a lack of resources and it was the easiest way for us to shoot a movie fast and cheaply. But [also] we wanted to prove, specifically for filmmakers of color, that it doesn’t matter what camera you shoot on; here is this filmmaker that looks like them that went out and made a movie with the same phone that they make phone calls on every day with less than a thousand dollars of accessories.”

Mostly improvised, 9 Rides follows an Uber driver (Dorian Missick, star of BET’s Zoe Ever After) as he pulls a long shift on New Year’s Eve. Through a series of fares—including The Mindy Project’s Xosha Roquemore, Eastbound and Down’s Omar Dorsey, and Pro Bowler Thomas Jones—the driver is exposed to a panoply of desires, egos, and anxieties, all while digesting his own life-changing news.

It’s a taut, attractive piece of work. And it’s all the more remarkable when you hear of how it came to be made. “The major limitation [of shooting a film with a phone] was directing actors with no monitor,” recalled Cherry. “It mostly takes place in a car and outside of the setups where I sat in the front or back seat I couldn’t get eyes on the actors. So I mostly had to direct by listening, while lying in the back seat next to my sound mixer who was in the trunk.”

“Another limitation,” continued Cherry, “was simply being the first to shoot a movie with this new phone. All the apps were newly updated and we had to learn on the fly. Even the Beastgrip Pro rig was only like two weeks old. But we were able to shoot low key. We used suction cups to place the iPhones everywhere in the car [so we didn’t need] a process trailer or policer officers to block off streets. It allowed us to get some very dynamic shots.”

The film recently premiered with a series of showings at South by Southwest (SXSW), the second of Cherry’s productions to do so. His first, The Last Fall featured a former NFL player struggling with retirement. It’s something Cherry knows a little about, having played on Sunday for three years as an undrafted free agent wide receiver and punt returner out of the University of Akron. But while his first feature borrowed heavily from his own experiences, this time he wants his film to inspire, rather than the other way around: “I want people to reach into their pocket and pull out their iPhone and say ‘his story was cool but I could do one better’ and go out there and make their film. I want 9 Rides to spark another movie.”

Screengrab via Matthew A. Cherry/YouTube