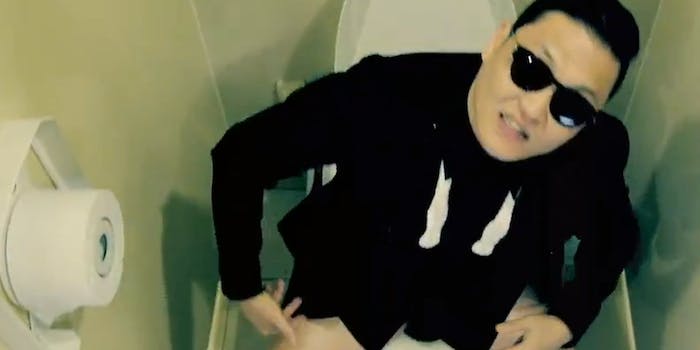 With 34 million views in the past month, PSY’s psychotic “Gangnam Style” music video thriller sits firmly on the short list of the most popular videos to hit YouTube this year.

The shot is a four minute firework that transcends absurdity and nosedives straight into the illogical. It’s flashy, relentless, and brilliant—the closest we’ve gotten to pure music video decadence since Jay-Z pushed “Big Pimpin’.” Daily Dot Editor-in-Chief Nick White has even gone so far as to call it “the raddest damn jam in the whole damn land.”

But as we’ve learned from cultural gut checks like Gotye’s “Somebody That I Used to Know” and Carly Rae Jepsen’s “Call Me Maybe,” a song is not a SONG until it starts to get the cover treatment. We filled an entire Tumblr with “Call Me Maybe” knockoffs back in June.

With “Gangnam Style,” we’ll start with a top 7.

All the glitz and glamour of North Korea’s oppressive capital city, all the fire and brimstone of PSY’s electric smash hit.

Fans of Japanese anime have gotten in on the trend, creating “Gundam Style,” a parody based on the longstanding animation franchise Mobile Suit Gundam. In this clip, PSY and his many cohorts have their faces replaced with the heads of mobile suits, AKA giant fighting robots, from the Gundam series.

A group of students cruise around the lake shore city testing PSY’s many stylings around the The Bean, Buckingham Fountain, and a basketball court in black tie tuxedos and Derrick Rose jerseys.

More like “Oppa Awful Style.” No clue how condoms fit into this one, but this kid looks drunk, and his interpretation of the song would have been better suited for MisheadLyricsGuy’s channel.

From the seat of his couch, teenaged Jun Curry Ahn pulls out his violin and adds another dimension to the dynamic jam.