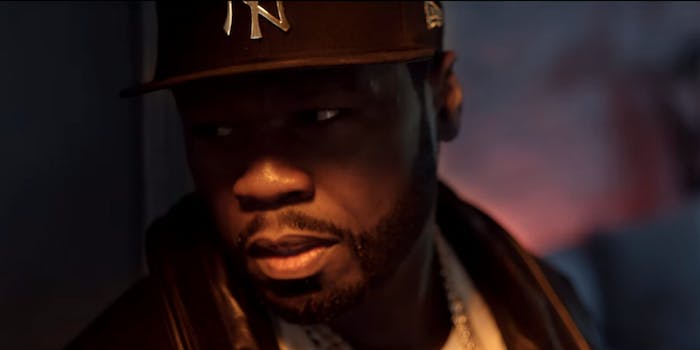 Get rich or die tryin' Bitcoin.

Update 3:32pm CT, Feb. 26: 50 Cent admitted on Monday that he never owned any Bitcoin. But he went along with the initial reports because it was beneficial to his “brand,” according to a bankruptcy document obtained by the Blast. (He had to admit as such to prove that he’s actually bankrupt.)

When 50 Cent‘s Animal Ambition came out in 2014, it didn’t really make a dent on the charts, but thanks to an investment in Bitcoin, the album has now reportedly netted between $7 and $8.5 million.

The rapper was allegedly the first to accept the cryptocurrency as payment and received 700 bitcoins for the album. At the time Bitcoin was worth roughly $662 a coin, which equaled out to about $463,000 in album sales. In the four years since, Bitcoin’s value has fluctuated, dropping steadily over the first few weeks of 2018. It sits at around $11,000 a coin, which would make 50 Cent’s 700-bitcoin investment worth more than $7 million.

In a 2014 Reddit AMA, 50 Cent said: “Technology is what’s changing the business gotta get with it.”

50 Cent posted the Tuesday TMZ article about his investment to Instagram, and in a comment he claimed he really did forget about it.

50 Cent (0.000046 BTC) posted on instagram about making millions of dollars in Bitcoin and forgetting about doing it https://t.co/fycFbwMaUZ pic.twitter.com/aD6VLj3zfS