What your reaction to ‘Too Many Cooks’ says about you

Unless you’ve been in Internet rehab all weekend, you’ve clicked a link to “Too Many Cooks,” an unbelievably strange 11-minute YouTube short that first aired in Adult Swim’s 4am “Infomercial” slot at the end of October—and has since racked up an unlikely million views.

What exactly happens in this high-concept, brilliantly edited viral film from Casper Kelly and Paul Painter beggars description, but: It’s basically an endless intro credit sequence for an ’80s family sitcom that never existed, which ends up encompassing a gritty cop series, a subplot in space, medical drama, and G.I. Joe–like animation. Plus a cannibal serial killer.

Though popular, “Too Many Cooks” is proving divisive. Here’s how the reactions break down:

Congratulations: you’re either a senior citizen or suffer from an attention deficit disorder. Did you really not have the time to find out where this was going? Or maybe you just weren’t on the right drugs. Anyway, we’re talking about a hopeless case here. You’re just going to have to ride out the week with everyone else talking “Too Many Cooks” all around you, wondering what exactly they saw in this collage of archaic genre signifiers. Rarely will you feel more alone.

2) You tried to dissect the joke.

Hey, don’t do this. Come on. I know you’re an expert on the comedy of Andy Kaufman, but really, nobody wants to hear the comparison. Like much of Adult Swim’s programming, “Too Many Cooks” is better understood as a bolt from the blue, or the pearl of an oyster: a beautiful oddity crafted by forces that we cannot begin to question. If you find yourself reading a collegiate essay about how it’s an attack on nostalgia—published on a site that fairly harvests the stuff—you may be missing the point. Try to relax and enjoy life a bit more.

3) You’ve forced everyone you know to watch it.

If “Too Many Cooks” was your twisted sense of humor in a nutshell, chances are you want a majority of your Facebook friends to confirm that it totally ruled. From there, it’s just a hop, skip, and a jump to a padded cell where you can howl that appallingly catchy theme song for the rest of your demented days. As with “I’m the Juggernaut, Bitch,” saturation can only lead to a culture of referentiality that collapses under the weight of its meaninglessness. Kelly has already said they’re going to shoot a new piece in January, so get excited for that instead.

4) You were uneasy, afraid, or infuriated.

Some of what we saw in the way of dismemberment, though cheesy, was legitimately frightening. It could have something to do with the “return of the repressed” famously described by Sigmund Freud—but then we’d be explaining the joke again. This might also be chalked up to a quirk of temperament articulated in Netflix’s viewing habits research, namely the Napoleon Dynamite problem: there are certain forms of entertainment people either love or viscerally hate, and we may never understand why. Accept your position and move on. 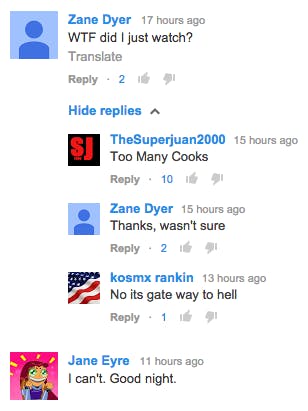 You’re a rare bird indeed. Though Kelly hid easter eggs throughout the short, he was flabbergasted that anyone went back to find them. Let’s assume that this obsession manifests in viewers for whom the history of television is more important than actual lived experience, with the result that any disruption or satire of its basic ground rules must be interrogated to the fullest extent of one’s will. We’d applaud you for this bold immersion, but we’re also pretty sure you’re not listening. Let us know when you’re ready to rejoin society, if ever.