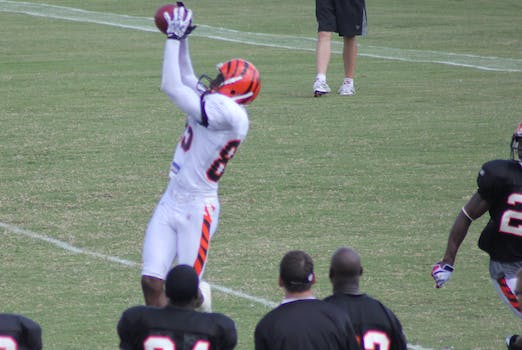 These 10 displays of excessive celebration were well worth whatever penalities they incurred.

In the NFL, dancing isn’t just limited to cheerleaders and inebriated fans.

Celebrating in the end zone after scoring a touchdown has become a popular pastime for many NFL players. Such activities tend to garner a great deal of attention—both positive and negative—from fans and sports commentators alike. They are also largely frowned upon by the NFL itself, which has been known to impose penalties, fines, and even suspensions for “excessive celebration.”

YouTube has allowed many of these celebrations to live on in infamy, even after players have long left teams or even the sport itself. In preparation for Super Bowl Sunday, the Daily Dot collected 10 memorable touchdown celebrations worth the 15-yard penalties they likely incurred.

Hanks’ version of the “Chicken Dance” appears less inspired by the popular wedding dance and more inspired by the Loma Prieta earthquake that struck the San Francisco area in 1989.

Many NFL players choose to stay upright when performing their dance moves. Morton, on the other hand, goes all out with his rendition of the Worm.

One of the most flamboyant players of the past decade, Johnson, well-known for loving his Twitter followers, also has an apparent love of the Irish step-dancing troupe Riverdance. Michael Flatley would be proud.

While a bit premature, Simpson’s celebration nevertheless managed to wow spectators and the defensive line alike. He totally sticked the landing.

While not the dance-intensive celebration that most players opt for, Davis nevertheless felt the need to mark his accomplishment against the Green Bay Packers by dunking the football between the uprights. Unfortunately, he came up short, resulting in the “Vernon Davis Fail” that made its way around YouTube in September 2012.