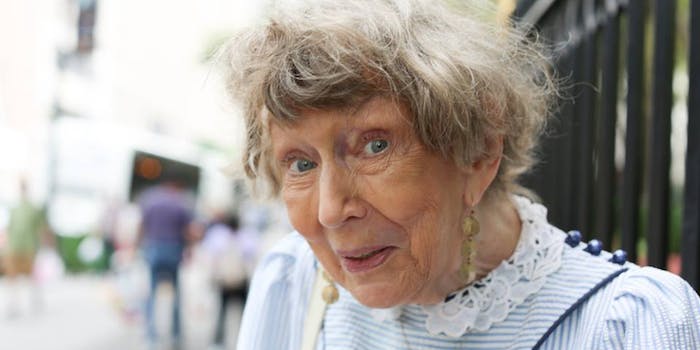 What better way to show that we are different but still the same?

In perhaps the only instance of meta-pseudo-clickbaiting yet, Gawker writer Daniel D’Addario recently called out the much-beloved and much-shared Humans of New York for being an endless stream of clickbait. The Comp 101-style critical analysis laid out starts off with a nod to the required course for English majors he is currently enrolled in—but don’t worry, he’s better than the rest of them, and he’s got the authentic New-Yorker snark to back it up.

I’ll save you the trouble: his problem with Humans of New York is that we only get a few lines from the stories Stanton hears from his subjects. Older folks’ photographs compositionally highlight every nook and cranny. Since all the subjects Stanton features are quirky, they’re really all quite similar. And because Stanton chooses certain pieces of his interviews to quote (a technique used even in journalism, which HONY doesn’t exactly claim to be), the subjects are not humans but caricatures and what’s more, they’re mere clickbait.

Now, I hate clickbait as much as any other sentient being, but there’s a line between artistic techniques of inclusion and omission and clickbait, and it’s not really a fine one.

It’s so easy to be above-it-all and ironic, but we’ve got enough going in the world and online that serves to isolate us and it’s not enough to use that to prove something worthless or lame. It seems to me that the real issue he’s got with HONY is in fact that it’s geared by pathos and (most likely as a result) quite popular. Questioning an author’s methods is fair game, but why stab Caesar if not simply to see him fall?

In the spirit of full disclosure, I thoroughly enjoy HONY and share posts that I find particularly relevant. D’Addario wants to know what people like when they “like” these posts on Facebook and reblog or comment on the Tumblr updates. Is it so hard to see?

In its earliest moments, the Internet was perhaps most eye-popping for its ability to connect us across distances. Aside from the obvious commercial, economic, and media-related implications, globalization really means that suddenly, the world is drawn tighter. Suddenly, we are not so alone. We can Skype across continents and know each other better across cultures. We really are all just humans, because the information-sharing lets the mystery fall away. If you want to see Brazilian streets during the World Cup, pull up Google street view.

We don’t know someone till we’ve walked a mile in their shoes, which is a cliché but a truism, too. By sharing these stories (which are stories in the narrative sense, not the page-length sense), HONY does what novels and music and all other forms of art do, too. They make us feel less alone because they show us that someone else has been there, felt this, done that too. HONY isn’t getting millions of likes and shares because it’s clickbait; it’s getting likes and shares because unlike lots of the other troll-composed, monetized junk on the Internet, it’s giving us something real. It’s giving us a certain kind of mirror, in that we are able to see and experience our own humanity by seeing and experiencing someone else’s.

So we are able to learn about the struggles of others, and that’s pretty great. We win. But you know who else wins? The people Stanton talks to, and not just the ones that get their pictures and words put into posts. A lot of these people, especially the older ones who are less inclined to status-update their lives to the nines, don’t get to have their stories told or voices heard. HONY is a conduit for different perspectives, no matter how you slice it. Anything that makes millions of people stop and consider the world around them in a new way is valid. Maybe Stanton’s method of pairing interview quotes with portaits isn’t revolutionary, but it sure is effective.

This stop-and-think-and-learn-and-grow sequence is nothing new. It’s why we read and listen and watch and seek out a multitude of media and other forms of expression and communication. As a voracious reader, I have always loved books for the way they make me feel like I am not alone—not by saying so, but by allowing me to share in the experiences of the characters, who are really proxies for the authors that create them in much the same way Stanton and HONY serve as a proxy for his subjects’ experiences.

The only difference between a novel or a memoir and HONY is that because these stories are delivered via the Internet, they are infinitely more accessible, more widespread, and less hidden. Not everything should be mainstreamed, but the kind of thoughtful portraits HONY presents scream to exist alongside BuzzFeed, Upworthy, HuffPost, and all the other Internet giants.

New Yorkers are infamously and paradoxically a singular breed in their loyalty to a city that practically no one comes from. As a Chicagoan, I understand city loyalty, and I can see the problems that can arise when we use geographically-oriented blanket statements—people get an incorrect or incomplete idea of a place and its people.

Are these New Yorkers, or are the Humans of New York just a smattering of half-drawn pictures meant to represent them all? I don’t believe so. Stanton could have called the project simply “Humans” and it would have been just as fitting, if not even more so, but New York is more melting-pot than anyplace else. What better way to illustrate collective humanity than to allude to the most diverse place on Earth? What better way to show that we are different—but not so much—than via Humans of New York?

Photo via Humans of New York/Facebook