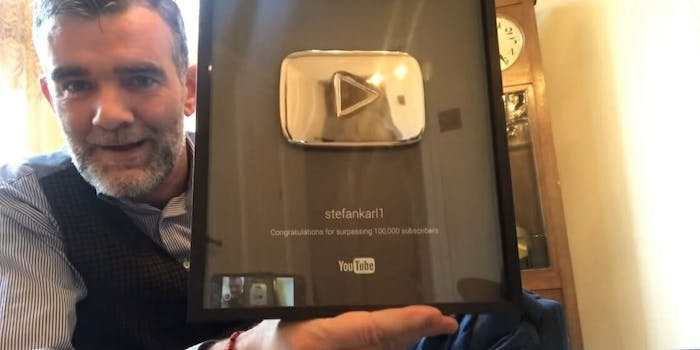 Stefán Karl Stefánsson’s fans badly want to get him to 1 million YouTube subscribers. About 10 days after his untimely death at the age of 43, they’re getting closer to pushing him over the top.

The day after the LazyTown actor and online superstar died, Reddit users on the r/dankmemes subreddit dedicated 24 hours to nothing but Stefánsson remembrances and memes. Now, Stefánsson’s fans, who loved him as the villain Robbie Rotten on the early 2000s children’s TV show and who made him a meme superstar on Reddit, are trying to procure for him the golden play button plaque that YouTubers who reach the seven-figure subscriber number receive in the mail.

Stefánsson wasn’t a prolific YouTube vlogger, but in a video uploaded 10 months ago, he made sure to thank fans for getting him to the 100,000 subscriber mark that earns YouTubers the silver play button. In his video, Stefánsson gushed about his fans for pushing him over the six-figure mark.

“Next, we need the gold button, and for that, we need 1 million subscribers,” he said. “So, click subscribe and cheer. He, he.”

Then, he turned his attention back to his silver button and said, “I’m going to hang this up to next my other trophy. I need a trophy room, I guess.”

He could surpass 1 million subscribers by next week, and clearly, the internet has been happy to contribute to Stefánsson’s subscriber count.

Done! This is the sweetest thing ever. I want to make it happen!

right? this would be a really great way for all of us to come together to contribute to his family he left behind

In 2015, Stefánsson was diagnosed with bile duct cancer. Despite a successful surgery in 2017, an inoperable form of the cancer returned this year.

rest in peace Stefán Karl. You will always be no. 1 pic.twitter.com/KlMc4ZIqpZ

As the description in r/dankmemes states, “Stefan, we want to thank you for all the amusement you gave us. We would also like to thank you for your positive outlook. Until the end, you kept your head up, and lived your life. We hope you’re doing great up there. #You are number one.”

Now, slightly less than (but soon to be more than) 1 million fans are making sure his family knows it.