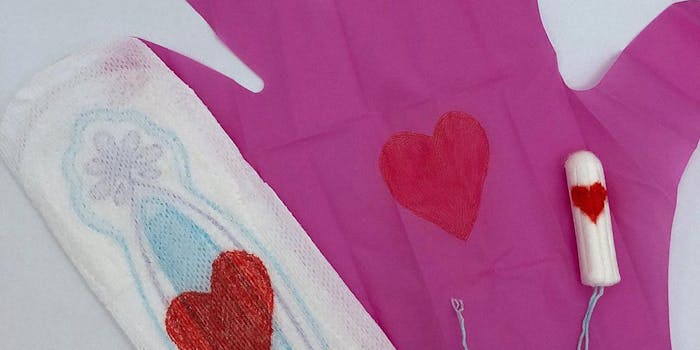 They claim to be against period-shaming.

Two cis men recently appeared on a German Shark Tank-style show called Die Höhle der Löwen, pitching a pink disposable glove intended for use by people who menstruate when removing and disposing of their tampons and pads. Somehow, the panel of judges decided this product was worth funding.

The product, Pinky Gloves, was apparently inspired by a time when the men saw tampons thrown into a bathroom trashcan. Claiming to be against period stigma and to have got input from their cis women housemates, they still somehow created a product that treats your own menstrual blood and vagina as something too gross to touch without a layer of latex between you. The product faced immediate criticism when the story circulated on Twitter this week.

Ironically, the distinctive hot pink color of the gloves would make the presence of tampons in the trash really obvious to any squeamish men who happen to be looking in it, as users are meant to wrap the glove around the tampon to dispose of it.

Most infuriating for many is the fact that while this unnecessary, wasteful, and insultingly pink product got funded on the same show that once rejected an eco-friendly, actually useful product created by and for menstruators—the now extremely successful period panties company Ooia.

There’s a tendency for cis male investors to sink money into predominantly cis male-owned companies and products designed to tackle “female problems” that don’t actually exist, and which also often create or encourage various stigmas which make women’s lives harder. At the same time, these investors tend to ignore products designed by and for women and other people who menstruate that would actually tackle real problems, out of the mistaken conviction there’s no market for these things. Part of why “Pinkygate “went so viral is it’s just such an egregious example of this, especially when compared to Ooia.

The makers of Pinky Gloves have responded to the backlash with a lengthy statement, acknowledging how much they have to learn and that they “have not dealt adequately and properly with the subject.” They also claim to be in favor of “removing the taboo from the subject” and will be rethinking their product as well as reflecting on the “history of its creation.” However, the gloves continue to be offered for sale on their website so it remains to be seen how sincere they are about this.

We have reached out to the creators of Pinky Gloves and will update this article if they respond.