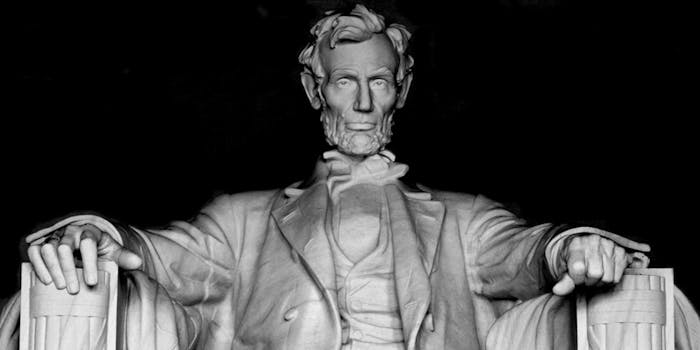 White men have enough holidays as it is.

There are dumb ideas, there are really dumb ideas, and then there are ideas so dumb you can’t believe they actually entered someone’s head in the first place.

This week, Fox News’ Tucker Carlson had one such idea, when he suggested an “older white guy appreciation day.” Funny enough, this was during a conversation on Fox & Friends about how the GOP can engage a younger, more diverse group of conservatives. The Twitter response was appropriately scathing.

To Tucker “We need an ‘older white guy’ appreciation day” Carlson: Fairytales can come true, it can happen to you…tomorrow.

saying u need “older white guy appreciation day” is sillier than when kids ask “when is kid’s day?” it’s literally every day.

This is all of Fox News in one clip: RT @mmfa: Fox News host: “We need, I think, an older white guy appreciation day” http://t.co/d5jJlU3pLl

To be fair to Mr. Carlson, there was a distinctly humorous tone to this proposition, implying that maybe he was not completely serious about this old white guy holiday. However, the scary thing is that Carlson’s statement, joke or not, is emblematic of certain conservative attitudes that have popped up over the last few years or so. Though she later deleted the article, former SNL funnywoman Victoria Jackson penned a decidedly un-jokey essay last year about why we need a “white history month.” Jackson was particularly emphatic about the need to applaud white men in this treatise. She wrote, “I’m just really tired of the white male, and especially the white conservative Christian male, being attacked in cartoons, movies, TV shows, politics, Affirmative Action, etc.”

But wait, there’s more. “Just for the record,” she continues, “white men invented rockets, space travel, airplanes, the automobile, the English language, the U.S.A., most medical advances, electricity, television, telescope, microscope, Ivy League Universities, the computer, the Internet, and on and on. I think white men should be praised and respected. White Christian Conservative Men especially, should be loved and adored. They were the backbone and originators of the greatest nation on earth. We need more of them now.”

Though Jackson’s now retracted words are laughably ridiculous, that she wrote them at all is fairly alarming. So let’s all just get on the same page right now: No, white guys don’t need their own month, or holiday, or anything else to let the world know how special they are. There are about a thousand reasons why this is the dumbest idea ever, but here are five for starters.

1) White guys have enough holidays dedicated to them as it is.

But why stop there? Independence Day is about the birth of our country, but it falls on an occasion where a bunch of white guys got together to write an important, albeit ironic declaration of “liberty and justice for all.” St. Patrick’s Day is named for a white guy, whose celebration is supposed to be in honor of Irish tradition but has turned into an excuse for Irish and non-Irish alike to get stinking drunk. And did you know that there’s a Leif Eriksson Day, dedicated to recognizing Columbus’ lesser known white guy predecessor (fun fact: he was a Viking!) in “discovering” America?

And we haven’t even scratched the surface of all the state Holidays dedicated to white guys. Alabama, for instance, celebrates Jefferson’s Birthday, as in Thomas Jefferson, not to be confused with Jefferson Davis Day, commemorating the President of the Confederacy, whose legacy is also celebrated in Florida. Speaking of the Confederacy, exactly five states also honor Confederate General Robert E. Lee on his birthday, which, ironically, falls around the same time as Martin Luther King, Jr. Day. And if that’s not white enough for you, a grand number of twelve states actually celebrate Confederate Memorial Day.

Not to be outdone by a few secessionists though, Abraham Lincoln’s Birthday is also recognized separately from President’s Day, in a total of eight states. Meanwhile, Lyndon Baines Johnson has his own “partial staffing holiday” in Texas, and Harry S. Truman has his own day in Missouri (probably much to the chagrin of some).

Are all of these holidays essential? Some more than others. But the one thing they all have in common is that they all honor old white guys.

2) And those holidays are already problematic enough.

Putting the obviously troubling aspects of recognizing the Confederacy aside, it’s key to remember that when we recognize the founding fathers on President’s Day, Independence Day, or any other day, we’re recognizing a group of men that included slaveowners. And not only that, but giving this particular group of white guys credit for ideas like “all men are created equal” is sadly flawed in retrospect.

Then there’s Columbus Day. Despite being considered an important part of their heritage by many Italian-Americans, the guy is also widely criticized today for essentially ushering in the type of colonialism that led to the near decimation of this country’s Native Americans. And while we’re on the subject of Native Americans, let’s remember that the tableau of peaceful pilgrims sitting down to a meal with their friends from the New World is basically a myth. The relationship between white settlers and the Native Americans they encountered was largely exploitative from the beginning, much as we might like to believe otherwise.

Several states and cities have counteracted Columbus Day with their own Native American celebrations. President’s Day and Thanksgiving, however, needn’t be problematic, lest we forget our history. A lot of President’s have done bad stuff, but that doesn’t mean we shouldn’t recognize our leaders’ major achievements. And a day where we take a second to be thankful for all we have in the country isn’t such a bad idea either, as long as we’re not using it to prop up some fable about pilgrims and Native Americans living in harmony.

All that said, these holidays also demonstrate the dark side of celebrating old white guys. Because too often, every old white guy who changed history for the better, also did something to make it a little bit worse.

3) There are plenty of other people way more deserving of their own holiday.

In recent years, Susan B. Anthony, Cesar Chavez, and Malcolm X have all been congressional candidates for national holidays, with several states already recognizing their place in history. Rosa Parks Day and Helen Keller Day are also celebrated in various parts of the country. There’s also Women’s Equality Day, which is not a federal holiday, despite being instituted by Congress in 1971, and International Women’s Day, which has been recognized by Congress since 1996.

But while Women’s Equality Day and International Women’s Day both have their place, we need more individual holidays to recognize the specific achievements of America’s many great women. Moreover, holidays that represent a people’s culture, like Kwanzaa, Native Americans’ Day (this was also proposed as a national holiday, but has instead been adopted by many states on a case by case basis, and redefined as “Native American Awareness Week,”) and Cinco de Mayo are great, but in the case of the latter, these holidays can run the risk of cultural appropriation. And on top of that, they don’t adequately recognize the achievement of non-white men on an individual basis either.

Giving people like Susan B. Anthony and Cesar Chavez federally recognized holidays would be a start. But when you really think about it, we’ve only begun to scratch the surface here. Sure, recognizing old white guys is all well and good, but not if it means neglecting everyone else in this country.

4) A holiday dedicated to white guys would reinforce the idea that white guys are the only people who matter.

And make no mistake, the act of ignorance really is the issue here. While some conservatives would tell you that we are living in a post-racial, post-sexism society, the evidence suggests otherwise. When an old white guy rejects something like street harassment as a problem, he reinforces the idea that white men have the right to treat women however they want.  And when an old white guy insists on calling Michael Brown or Trayvon Martin a “thug,” he reinforces the idea that minorities are innately violent; thus, white guys are innately superior.

Together, all of this vitriol combines to create a pervasively toxic mindset that white men are the only ones with opinions that count, and are therefore the only ones whose opinions and accomplishments are worth anything.

5) White guys just want their own day because they’re scared.

Here’s a fun activity: go to YouTube, watch the SNL sketch “Whites” (a highlight of the season so far) and then take a shot for every comment below from an angry white person who feels threatened by the video or sees it as indicative of rising propaganda against the white race. Actually, don’t do that, because you’ll be dead in about two minutes.

When someone like Glenn Beck goes on television and calls President Obama a racist, you know white guys are getting paranoid. It’s as if, some time in the past few years, white men in this country glimpsed into a crystal ball, which showed them a future where they were no longer the only ones with in power, and rather than accepting that future, they decided to fight as hard against it as they could. This has also been evident in the rank and file of the GOP, who have managed to recognize they have a problem connecting with people who aren’t old white men, yet continue to fail in correcting that. Carlson and Jackson’s comments reflect this, too, proving that for some, it’s easier to cling to the vestiges of a primitive past, rather than accept a more enlightened future.

The final irony here though is that while we’re moving towards a world run less on the whims of old white men, that day is still a long way off. In America, old white men will likely remain the masters of the universe in our lifetimes. Take a look at the projections for the upcoming midterms if you don’t believe this; once again, the old white guys are expected to come out on top.

Old white men run America, and the last thing we need is another day that recognizes them (to clarify, we’re talking about old, straight white men here; a guy like Harvey Milk, on the other hand, is owed a national holiday any time now). As a white man myself, I know that I benefit heavily from the privilege of my race and gender. And while that doesn’t mean I’m going to reject the contributions that other other white men have made to this country, it does mean that I understand the leg up they were given at birth.

So let’s stop this madness. Take it from a fellow white guy: Old white men have enough stuff already, and anybody who suggests they need their own holiday on top of that is being an idiot.