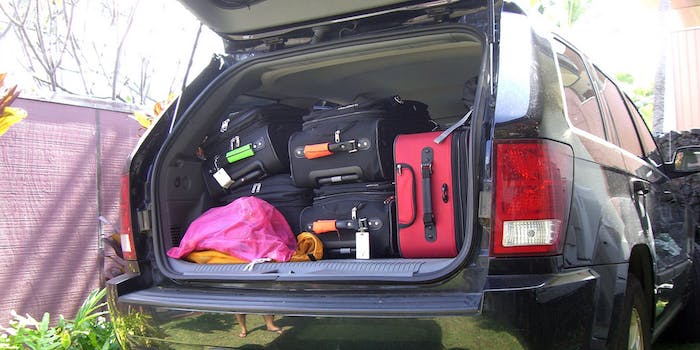 Moving in with Mom and Dad isn't all it's cracked up to be.

With graduation around the corner and still no concrete plans after commencement, it was time to start figuring out what I was going to do once college was finally over. I had virtually no savings and was using the paychecks from my work-study job to pay off expenses from a recent internship in New York City. The lease for my apartment was going to be up just days after graduation, and I also needed to figure out out a living situation. Many of my friends asked, “Why don’t you just move back home until you find a job?” That wasn’t really an option for me.

The post-grad migration back to one’s hometown is a millennial trend over the past 15 years, earning today’s youth the nickname of “the boomerang generation.” It’s a well-documented and often-researched phenomenon, with the recession and high levels of unemployment credited as the main reason for boomeranging back to your parents’ house. But even with an improved job market, a new Pew Research Center study found that increasing numbers of millennials are still living with their family, and in a tweet, Forbes called it “the new normal.”

Although it’s news that this trend isn’t slowing down, what we often don’t talk about is the fact that moving back home is, in fact, a privilege. That might sound strange to you at first: Wouldn’t being “privileged” include having job security and a steady income to pay for an apartment right after school? While having to sleep in your childhood bed in the middle of suburbia might not sound ideal, for some millennials—and particularly lower-income ones—there’s not always an opportunity to go back home.

If graduating isn’t stressful enough, try doing so in this economy. As the Washington Post points out, incomes are rising—but so are housing costs. This is especially true in metropolitan hubs which may have more job opportunities but are also more expensive to live in. Places like Los Angeles and New York City might sound like viable places to find jobs, but with respective median rents of $2,460 and $2,331, it’s a shock that anyone is able to live comfortably in these cities.

Even smaller cities like Portland and Austin are seeing rent prices increase twice as fast as the U.S. average—3.3 percent. More jobs might be available, but having so much of your income funneled into paying the bills leaves little to be put into savings accounts or toward student loan payments.

Thus, moving in with your parents seems like a simple solution to a complex problem—but it was never an option for me. In my situation, my family didn’t own the home that I grew up in. After my sister and I went off to college, my mother downsized and moved into a new place to cut rental costs. Coming from a lower-income household than many of my peers, I didn’t expect for my mother to financially support me after school, even if I knew other recent grads without jobs would be depending on their parents for some financial cushioning.

Having a place where I could figure out my next step would have been pleasant, but my mother had been on her feet holding up my sister and I for years—it was time for her to stop worrying about me. So even if I wasn’t ready to be standing on two feet in the real world, I’d figure out how to get by standing on one.

And as Hanna Brooks Olsen pointed out in an editorial for the Daily Dot, moving itself is an extremely costly venture. Packing up all my belongings that I had accumulated over the years in Chicago and heading back to California was something I couldn’t pay for at the time.

This is the case for a number of millennials like me, who lack the safety nets that other boomerang kids enjoy. As professor Wesleyan University Rob Rosenthal told NBC News, if “your family is poor, and your friends are poor… they may try to help you, but at some point, they run out of resources, too.” Rosenthal writes, “They can’t afford to have another person [living with them] forever.”

Moving in with your parents seems like a simple solution to a complex problem—but it was never an option for me.

Like many other low-income students, I had to figure it out on my own, with little intergenerational wealth to fall back on. Three-quarters of of the 8.6 million students who receive Pell Grants report having no savings, and the strife that low-income students face doesn’t just disappear when a diploma is handed to them. To get by, I found a part-time job at a café, picked up freelance writing gigs, signed up for research studies that paid, and moved into a cheap sublet. All the while, I was on the hunt for the career opportunities I was told that would come with a college degree.

Although I’m confident that my mom would have figured something out if I absolutely needed to come home, putting that added strain on her was unnecessary—because I knew that I’d figure things out eventually. Coming from a lower socio-economic background, financial survival is something that I learned a long time ago.

However, money isn’t the only reason why some millennials aren’t able to return home. Not everybody is welcome back with open arms. After graduating college, a friend of mine fought to stay in Chicago because if offers the LGBT resources that aren’t available in rural Ohio, where his parents live. A major community center like the Center on Halsted—with three floors dedicated to providing a safe space for the city’s queer residents—is simply unthinkable, let alone free HIV testing.

Other colleagues suffered different barriers to re-entry. Their parents were now taking care of their grandparents, leaving no space in the home for them to stay and live at all comfortably. Multi-generational households are especially common in the case of racial and ethnic minorities, with one-in-four Latinos and black folks living in a multi-generational household, as well as 27 percent of Asian Americans.

Millennials moving back are being applauded for making the hard choice. In an editorial for the Washington Post, professor Steven Mintz called it a “smart career move.” A lecturer at the University of Texas at Austin, Mintz writes, “[M]y students consider their parents friends. Their homes will be their base camps from which they will pursue the internships and educational experiences they want.“

These arguments make sense for millennials who need to subsidize their choice internships and volunteer opportunities—or whatever job they can fund—by shacking up with Mom and Dad. The idea is that, by doing so, they’re able to put away some money for future expenditures. But if they’re going to rent a U-Haul back to Anywhereville USA, they should also acknowledge the number of people who can’t. Not having to worry about living paycheck to paycheck is an incredible luxury, one denied to countless millennials who have to struggle on their own.

It’s time we start recognizing that the experience of millennials is more complex than the Internet narrative suggests, as some aren’t afforded the opportunity to boomerang. For those individuals, there’s no going back. Just forward.

Gabe Bergado is a Staff Writer at the Daily Dot.