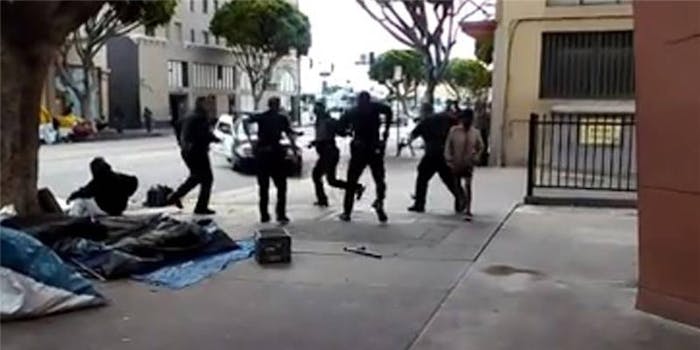 This is how a homeless black man became just another hashtag.

Four police officers pile on top of a man, struggling to subdue him as he appears to be fighting for his life. Amidst the chaotic fray, the word “gun!” is heard, then five shots ring out. The man lies dead on the pavement. This scene describes not just the fatal LAPD shooting that went viral this week after footage surfaced on the Internet but the long, national nightmare America can’t wake up from.

After the events in Ferguson, Mo., made police shootings of unarmed black men a constant trending topic on Twitter, the lethal situation that unfolded on March 1 in Los Angeles struck a painful chord in America’s soul—another day, another hashtag. The recent explosion of #HomelessLivesMatter tweets recalls not only Mike Brown, Eric Garner, Ezell Ford, and Trayvon Martin but also is a reminder of why we remain divided as ever. To some, the unnamed man killed on L.A.’s “Skid Row” (his name has not been released by police, he remains identified only by people who knew him as “Africa”) is yet another exasperating case in an out-of-control epidemic of police violence. To others, it’s just the opposite: It’s more proof of the danger of situations police place themselves, supporting the idea that if you struggle with a cop, you’re going to get shot.

It’s unclear what sparked the scuffle that led to police opening fire on the man or why the police even approached him in the first place. Neither the bystander video, nor footage from the police’s new body cameras (still unreleased, but shown to journalists from the Los Angeles Times) definitively shown whether the man actually tried or managed to get control of a police officers firearm and was threatening anyone’s life. In those moments, all five men may have feared for their lives, but only one lost his.

In those moments, all five men may have feared for their lives, but only one lost his.

To suggest that this man brought about his own death, as Cleveland police have argued about Tamir Rice, or that his actions meant he deserved to die would mean that we haven’t learned anything at all from Ferguson. Even if he did, in fact, try to grab the cop’s gun, that still doesn’t Los Angeles police had to take his life. Especially considering the less lethal alternatives to deadly weapons available, the bottom line is that the cops are the ones who brought guns into the situation, and never should have been the ones to approach the man.

Reports from several witnesses point to the conclusion that this man clearly suffered from mental illness, as nearly one in four homeless individuals do. The people confronted by the police that day lived in tents on the street. No doubt highly vulnerable and anxiety-inducing, their situation could be the result of any number of causes, life experiences, or choices.

“As long as police are charged with moving, shaking, and harassing people not to stay in camps, not to sleep on the park bench, we’re going to have huge tensions,” Mollie Lowery told the L.A. Times. She is the founder of LAMP Community, an organization that provides aid to Los Angeles’ homeless population. “The man shouldn’t have been on the sidewalk. He needs a society willing to provide mental health services on demand.”

As Lowery suggests, not having a home shouldn’t make you a criminal, and it should have been mental health professionals who went in to address the needs of the homeless, not police. Only specialists trained in nonviolent communication and sensitivity to people with special needs can bring potentially volatile scenarios to a safe resolution without bringing a gun to a situation where someone who is unhinged might use it.

Coming into a situation and treating homeless people like criminals is recklessly putting them in danger. Authorities have a responsibility to ensure the safety of all citizens, and the letter of the law recognizes that the homeless population is especially susceptible to California’s Mental Health Services Act of 2004 acknowledged.

Untreated mental illness is the leading cause of disability and suicide.

Untreated mental illness is the leading cause of disability and suicide, imposing high costs on state and local government. Many people left untreated or with insufficient care see their mental illness worsen. Children left untreated often become unable to learn or participate in a normal school environment. Adults lose their ability to work and be independent; many become homeless and are subject to frequent hospitalizations or jail. State and county governments are forced to pay billions of dollars each year in emergency medical care, long-term nursing home care, unemployment, housing, and law enforcement, including juvenile justice, jail and prison costs.

The situation has been sharply exacerbated in recent years by the state’s budget cuts to mental healthcare access. In the 1980s when Ronald Reagan, then the governor of California, slashed public funding for state mental health facilities, prisons started taking over to fill in the gaps in treatment. Unable to receive proper medical services to meet their needs, people with mental illnesses were systematically relegated to treatment behind bars. From 1980 to 2014, the number incarcerated people has skyrocketed by over 450 percent, making California’s prison system now the largest provider of mental health services anywhere in the state.

A report published by Stanford University Law School in 2014 asks the key question with its title: “When did prisons become acceptable mental healthcare facilities?” The report details how the number of people incarcerated with mental illnesses has nearly doubled since 2000, coming to represent an estimated 45 percent of the entire prison population, attributing the rising incarceration of patients to the decimation of access to state-run care facilities.

“In a cost cutting move 30 years ago, California drastically cut back its services in state hospitals for people with severe mental illness. Thousands ended up on the streets homeless and incapable of caring for themselves,” said Senator Darrell Steinberg, the author of Proposition 63, the bill which became law under Mental Health Services Act. “Today, thousands of suffering people remain on our streets because they are afflicted with untreated severe mental illness. We can and should offer these people the care they need to lead more productive lives.”

And keeping people in prison is big business. The Corrections Corporation of America (CCA) rakes in over a billion dollars a year from government contracts to run prisons. These privately owned facilities can often to subject to less oversight and fewer regulatory scrutiny for safety conditions and have been found to produce squalid, inhumane treatment of incarcerated people, which can be even worse for people with mental illnesses.

The man killed by Los Angeles police officers not only struggled mental illness, as so many other homeless do, but he was black. Data has consistently shown that black men are disproportionately arrested and imprisoned even though they are a minority of the population. Furthermore, just more than half of California’s adult male population is non-white or Latino (56 percent), but these groups make up three of every four men in prison. Thus, this man lived at the intersection of America’s deepest problems, and was utterly failed by the system.

We may be as unlikely to know if or why Africa reached for the gun as we are unlikely to know if or why Mike Brown supposedly decided to attack Darren Wilson without provocation, as grand jury testimony suggested. This question is irrelevant. The question whose answer will save lives and keep innocent people out of danger is a much more difficult one: Why did the police approach Africa in the first place? Why did police approach Eric Garner and feel the need to put him in a fatal chokehold? Why did Peter Liang have his gun drawn with his finger on the trigger while he was walking in Akai Gurley’s stairwell?

These are the questions America needs to dig deep and find the answers to. They may be painful to confront, but doing so is the only thing that can start to bring about solutions that will prevent more men from becoming just another hashtag.