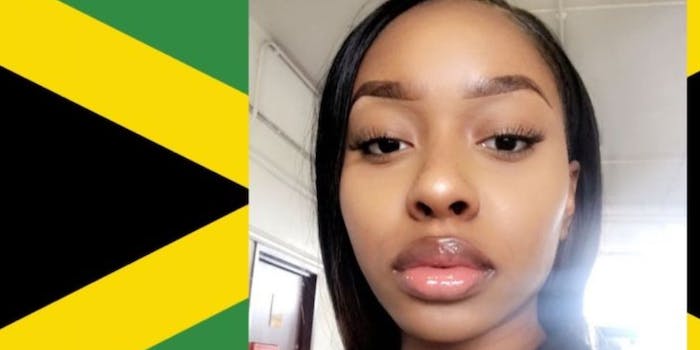 'This GoFundMe is for them. They want me to go. I will happily leave.'

A Black woman living in London set up a donation page for the racists telling her to “go back to your country.” Jordene Phillips is calling on them to put their money where their mouths are and pay for her ticket to Jamaica if they really want her to “go back.”

If she’s going to get racist comments, she may as well get some coin from it, Phillips figured.

In the GoFundMe post, Phillips wrote that she hates living in London “due to the racist idiots who tell me to go back to my country.” She continued to say she will “happily” leave if they fund the expense.

“The British Government brought my ancestors here and lied to them. Now I’m born in this crap,” Phillips wrote.

“They see my island as a holiday destination but tell my people it is violent and evil,” she continued. “They have convinced young British born Jamaicans that there’s no opportunities there. Listen, I’m done talking init. PAY FOR MY TICKET DEN SINCE YUH BAD!”

Created within the past 24 hours, the post is still far from its $6,400. As of Saturday afternoon, 23 people donated a total of $275 for Phillips’ move. One of the donors signed their name “Dyo YouGoGirlFuckEm,” and on the opposing end is someone who called themselves “Steve Getdafckou.”

The majority of people online, however, seem to appreciate Phillips’ ingenuity.

“This is jokes,” @OfficialBPlus wrote.

“Good morning to the girl who set up a gofundme for racists to find her trip back to Jamaica ONLY,” wrote @maxinethepoet.