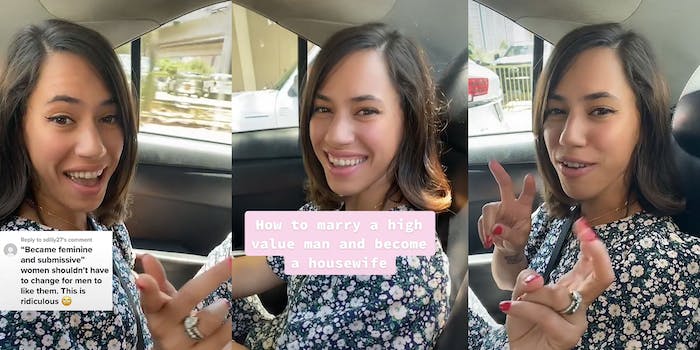 ‘I can’t tell if this is satirical or not’: TikToker draws backlash for saying a housewife is a ‘job’ a man hires you for

'You think relationships should be equivalent to working at Kohls????'

Last week, TikToker Pearl Davis posted a clip captioned “How to marry a high value man and become a housewife,” and tagged her friend Aly Drummond. In the clip, Drummond shows off her wedding ring in the back of a car and details how she “became a better human being,” as well as how she “became feminine” and “submissive,” and landed a husband.

Predictably, it went viral. The TikTok has more than 1.4 million views.

Drummond argues that being a housewife is a job, but “you need a man to hire you for it.” She runs a YouTube channel, RealFemSapien, where she has a little over 3,000 subscribers and explores tradwife content—preaching a return to femininity, domesticity, and that aforementioned submission—and has several videos about “hypergamy,” or marrying up. In a recent video titled “Surgeon Plans to Transplant Womb into Trans Woman and Impregnate Her,” Drummond links to an event called the Conference of Masculine Excellence, which boasted a lineup of misogynist dating and relationship coaches.

She also posted a “thank you” to Kevin Samuels, the controversial YouTuber who passed earlier this month and espoused an outdated view of dating and gender. In a 2021 video, she cites Samuels as the reason why she got engaged to her current husband, who is 23 years older than her. In that clip, she calls herself a “women’s coach.”

There are multiple videos of Drummond on Davis’ TikTok as well, as she attempted to respond to all the negative or questioning comments. Davis also has a YouTube channel, JustPearlyThings, where she has more than 66,000 subscribers and posts similar content to RealFemSapien. In a recent Instagram clip (which features Davis), Drummond talks about the Amber Heard-Johnny Depp trial and laments that Depp didn’t marry her.

The comments on the original TikTok are mixed; a lot of people agree with Drummond’s approach, with the occasional assertion that this is “sad” or maybe a joke. On Twitter, it was a different story.

“The absolute wildest thing about this is comparing working 9-5 RETAIL .. to an emotionally invested, loving relationship w another consenting person like ???????” said TikToker Drew Afualo. Quite a few people held up the Kevin Samuels interaction as a red flag, too.