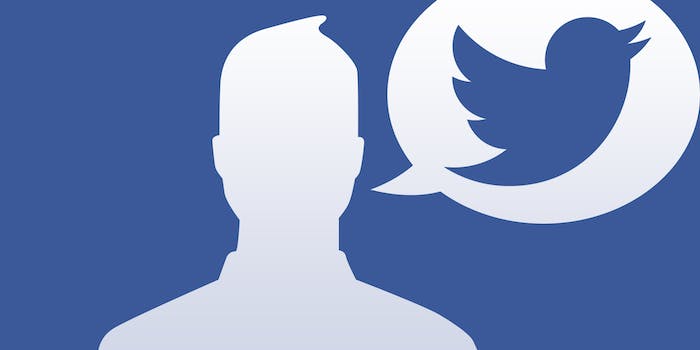 Their feed wasn't broke, but Twitter fixed it anyway.

If you’ve used Twitter’s mobile app recently, you may have noticed random tweets from people you could have sworn you weren’t following. You weren’t just imagining things: Twitter was gaslighting you, via a new and somewhat mysterious algorithm that “make[s] your home timeline even more relevant and interesting,” according to Twitter. The company has started adding random content to users’ timelines as part of a larger systemic scheme to generate more profits—and while they’re rolling the change out slowly (it still doesn’t apply to Web Twitter or to third-party apps), expect that to change soon.

Here’s the scoop, right from the bird’s mouth: “When we identify a tweet, an account to follow, or other content that’s popular or relevant, we may add it to your timeline. This means you will sometimes see tweets from accounts you don’t follow. We select each tweet using a variety of signals, including how popular it is and how people in your network are interacting with it. Our goal is to make your home timeline even more relevant and interesting.”

Sound familiar? That’s because Facebook and Tumblr both do something similar, with both sites identifying such content via tiny logos and other hard-to-catch signals, causing a moment of confusion for users as they try to figure what this mysterious content is and why it’s suddenly appeared. (Apparently the “Who To Follow” prompt wasn’t enough, nor were Sponsored Tweets.) Now, Twitter has to go a step further and propagate information by random strangers in user timelines.

What the service, and other sites following this model, don’t seem to realize is that users want to curate their own feeds, not have their feeds curated for them. This is why users choose whom to follow, selectively turn off retweets from some of the people they follow (because who likes being inundated with hundreds of retweets a day?), and use third-party apps with robust filtering mechanisms in order to further weed out topics they’re not interested in. It doesn’t occur to Twitter than in some cases, users may not be following someone for a reason.

While Twitter is applying some interesting data science to this manipulation of user feeds, it’s not considering the needs of users, despite the claims it’s making. The service seems to be willfully ignoring the expressed desire from users to leave feeds intact and untampered with—notably, users are already riled up over a related change to the favoriting functionality which injects Tweets favorited by followed users directly into your own timeline. (In other words, if you follow Jackie O. and she favorites a tweet by Johnny F., it shows up in your timeline—even if you don’t follow Johnny F. and she didn’t actually retweet his tweet.)

This reflects a sort of Facebookification of the Internet, where reporting on individual user activity becomes an integrated part of the service instead of a separate activity. When users log on to Facebook, they don’t just see what friends are posting and sharing. They’re also subjected to listings of what friends are liking and commenting on, if Facebook thinks these posts are “relevant.” Like Twitter users, Facebook users aren’t necessarily delighted with this trend—they’d rather view the content they signed up to view, or the content explicitly recommended by their friends, as opposed to the content recommended by an algorithm that isn’t necessarily relevant or capable of capturing the nuances of their online activities.

This also raises the question of when Twitter will take the logical next step and start actively messing with displayed tweets on the timeline like Facebook does with posts, displaying information out of sequence and out of context depending on well it’s performing, how much promoters are willing to pay, and how popular the individual user is within the context of a larger social network.

The delightful thing about Twitter is its highly democratic nature. Anyone can make an account and tweet from it, as well as selectively curating a feed by retweeting status updates from other accounts. Any user can follow any other user, and rich networks can be created through hashtags, lists, and shared commonalities built up by users. These networks are incredibly commercially valuable to Twitter, and so far, the site has left them largely alone with the exception of the much-loathed promoted tweets.

Now, that appears to be shifting, as the service moves into the next iteration of its digital lifespan and applies itself to generating higher profit margins and increasing the extent to which users are the product, not the population being served. The manipulation of timelines seems like an inevitable next step in the wake of this injection of unwanted content into user feeds – as does the scaled structure of a Twitter accessible to those who can afford it, and useless for those who cannot.

Many individuals, startups, and small brands rely on Twitter to disseminate information, build up followers, structure a brand, and create loyal fans. What if they could only get ahead on Twitter by paying for the placement of Tweets, or hiring consultancy firms to ensure that their Tweets are considered sufficiently “interesting” to be forced into the feeds of people who don’t subscribe to them? Twitter already has a significant bot problem that’s bound to get worse in the face of a system where there may be even more of an incentive to create fake accounts in order to manipulate the Twitter algorithm.

Like many social networks, Twitter often seems out of synch with users in terms of how they utilize the service. The company didn’t understand hashtags and @replies at first, for example, initially pushing back on these uses who invented these hacks of the service before it finally gave into them and integrated them into the core functionality (though users complained and continue to battle over old- vs new-style retweets). There’s a specific syntax and culture to Twitter that the company seems reluctant to recognize, which is frustrating for users.

Favoriting, for example, is used as bookmarking but also as a silent mode of acknowledgement for some users—hey, thanks, this is interesting. If users wanted to redistribute a tweet to their followers, they’d retweet it—which is why users utilize both functions. By collapsing the two together and forcing favorite tweets into the timelines of unrelated users, Twitter is refusing to respect the way people use the service, and it’s upsetting the established dynamics of how people interact with it.

Ultimately, Twitter doesn’t care—for all the users it infuriates, plenty more will stay on the service, and advertisers will delight in the added opportunities. Even as some suggest that Twitter’s changes may make it irrelevant and force a mass migration to another service. Twitter shows no signs of lagging anytime soon. Users are still highly active on the service across a wide range of industries, from authors connecting with fans to companies announcing sales to customers.

But these changes to the timeline reflect a larger, irritating, and troubling trend, in which sites fall all over themselves to copy the worst (and most profitable) elements of Facebook—the very same elements that users themselves hate the most. Will this eventually trigger a user revolt, or will people become accustomed to a social media status quo in which they are happy with having their supposedly democratic content filtered and curated by an external algorithm?