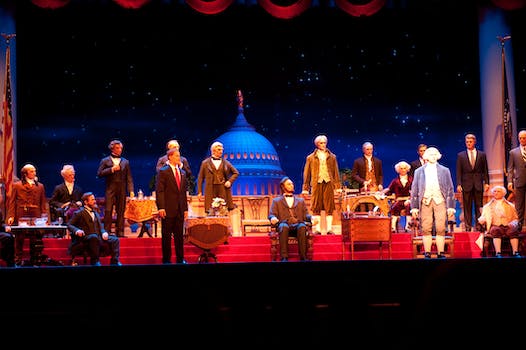 Could a gag on Twitter keep Trump silent at Disney’s Hall of Presidents?

This is one place where Trump might not get to speak his mind.

Donald Trump is known for speaking boldly, brashly, and commanding large audiences. Whether or not audiences agree with what he has to say, when Trump speaks, people listen. But one place where the 45th president may not have a chance to make his voice heard anytime soon is Disney’s Hall of Presidents.

A Change.org petition advocating for a silent Trump in the Hall of Presidents has earned nearly 14,000 signatures, and Disney may be listening.

Matt Rogers, who launched the petition in January, told the Daily Dot it all started as a joke.

I know this is low on the priority list but we CAN NOT LET animatronic Donald Trump give a speech in Disney World's Hall Of Presidents show.

“It was a tweet, but as I was writing it I was like wait no I actually believe this,” said Rogers.

He added, “Trump’s record shows that he’s not capable of respecting everybody. And his language is not appropriate for family audiences.“

When a friend jokingly responded that she’d sign a Change.org petition for the cause, Rogers decided to take the joke to its natural conclusion and drafted the petition.

While Rogers was surprised and delighted to see his signature numbers climb, he’s doubtful that his petition has had any real impact on Disney’s decision-making process. “I don’t actually think that it did anything,” said Rogers. “I think that the reason it’s not happening is because he’s just miserable to work with…I don’t think Disney wants to do it.”

According to Motherboard, there’s been extensive drama backstage at Disney regarding designs for an animatronic Trump and whether he’ll speak remains in doubt. A source close to Walt Disney Imagineering allegedly told Motherboard, “They were convinced that Hillary was going to win. They were having conversations in late October and early November on how to dress her. ‘Should it be the pantsuit she wore at the [Democratic] National Convention? Or should it be a darker color?’ They were thinking along those lines. No one was giving any serious thought to it being Trump.” (Editor’s note: Motherboard has since retracted both of its stories on Disney’s Hall of Presidents and is reviewing how the source was vetted.)

Bill Clinton was the first president to make a speech at the attraction and others have followed suit, but given the polarizing nature of our current president, sources say Disney may have to rethink the attraction.

This isn’t the first time Disney has had to reengineer its attraction. Following the 1992 Los Angeles riots, Disney brought in historian Eric Foner to draft a new script for the attraction. The hyper-patriotism of the original script read as tone deaf amidst social and political turmoil.

Foner told Motherboard, “They asked me, ‘What’s your concept, Professor?’ And my concept was that the American Revolution set forth a group of ideals, and we have been struggling since then to live up to those ideals. We’ve made progress, but we still have more [progress to make].”

So will Trump remain silent in the Hall of Presidents? Time will tell.

But, Rogers, a long-time Disney fan, remains hopeful. “I have been going to Disney since I was a young kid, and I have respect for what [Disney World] is…I just don’t want to see it soiled.”

He added, “It’s still sort of a joke to me. But I LOVE that people are taking it seriously.”

Editor’s note: This article has been updated in light of Motherboard’s retraction.