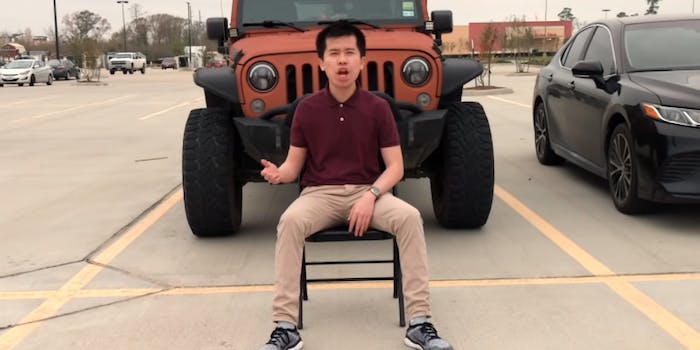 DNA might be the next big topic in hip-hop.

When Jason Yu’s teacher asked him to make an extra credit video for his biology class, he went above and beyond, turning Kendrick Lamar’s 2017 hit “DNA” into a song about actual DNA.

His class at Summer Creek High School in Houston, Texas, undoubtedly loved it, and they aren’t alone. Since it was posted a couple of days ago, the video has been viewed over 10,000 times.

The video features Yu and a friend in various settings, explaining the components of DNA. Here’s a small sampling of the lyrics, the entirety of which are available in the description of the YouTube video:

See, I got, I got, I got Growth, cells prepare to grow and build during interphase
All the genes, they all double up when it comes to S-Phase
Begins condensing, in the center during cell Prophase
Fibers attaching, they come to the center, Metaphase,
See, in Anaphase the DNA moves into polar fronts
Then in Telophase all DNA, are in two equal sons

Yu’s biology teacher, Caitlin Huber, linked to the video on Twitter yesterday and wrote: “My kiddos did an amazing job on their extra credit projects. I had loads of talented submissions. This one was especially great.”

My kiddos did an amazing job on their extra credit projects. I had loads of talented submissions. This one was especially great. Check it out: https://t.co/KNzhWTXS3p @HumbleISD_SCHS #SCHSWeAreOne

“Jason did a great job creating a content related, catchy, song to review the concepts outlined in class,” Huber told the Daily Dot in an email. “The video was wonderfully produced and pieced together.”

Huber, however, wasn’t thrilled about one part of the video. “I just wish he would have avoided the adult beverage and cleaning aisles at our local grocery store,” she said.

“Overall, I am highly impressed with his ability to write such a great review song that can consistently be referred back to as we scaffold in more content,” she said. “I think many biology students will benefit from his creation!”

You might be surprised to find out that this isn’t the first time a student has created a viral music video about DNA for a class project. Back in November of 2017, a college student wrote and performed an original piece after his professor offered to curve the grade of any student who made a music video.

DNA is apparently a popular subject for hip-hop now. What we need is a full album of biology rap. Jay-Z, the ball is in your court.