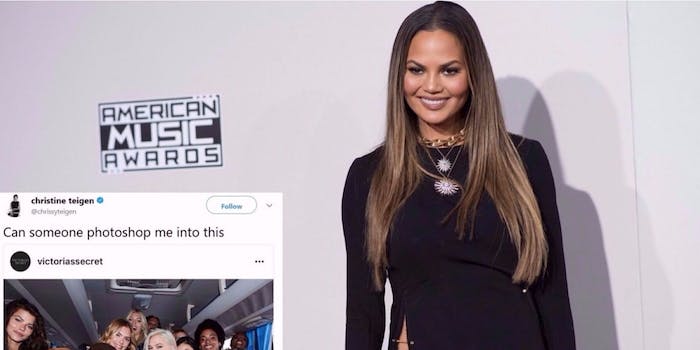 Usually, asking the internet to Photoshop you into something or to comment on your appearance is a terrible idea. Twitter is filled with trolls, and they’re more than willing to take your innocent request and then crap all over you.

Teigen said she was at a Victoria’s Secret fashion show in Shanghai this weekend, but since she claimed nobody was available for her fitting, she had one small request—help in making herself part of the show.

no one is answering my phone calls or emails but I am here in shanghai and ready for my fitting !!!!!! https://t.co/VzrMDRJiP2

Can someone photoshop me into this pic.twitter.com/ULf1qPglsa

The responses were quick and well done. Well, some of them were well done.

Edited it a lil pic.twitter.com/acFI7hgtzm

Other attempts weren’t quite as successful.

I have two options for you pic.twitter.com/r5L05GwpI1

I tried to make it subtle pic.twitter.com/szy9sOb62D

But here’s the real punchline. Teigen wasn’t in Shanghai at all. Instead, she later tweeted out pictures of herself at the L.A. Lakers game.