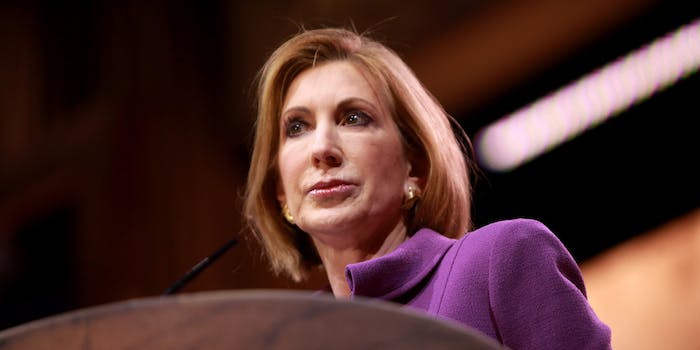 Carly Fiorina was the big winner of last night's Fox News debates—but no one was watching.

If the Internet is to be believed, Carly Fiorina was a smashing success in yesterday’s Republican first round of presidential debates. The former Hewlett-Packard CEO far surpassed her peers in Twitter mentions (according to Google and Topsy.com) and received the most Google searches among participants in the forum. At a watch party sponsored by the American Conservative Union, Townhall.com’s Guy Benson unequivocally declared: “We have a winner and it’s Carly Fiorina.”

WINNER: And after the early debate, Carly Fiorina destroyed Chris Matthews too http://t.co/OXHZRtG5mm

At Cleveland Airport with Carly Fiorina day after debate. She knocked it out of the park last night ! pic.twitter.com/GBdP6KXWr1

The only problem was that she didn’t make the main stage last night on Fox News—she had to debate with Gov. Rick Perry (R-Texas) and Sen. Lindsey Graham (R-S.C.) in the GOP’s overflow section—what many derisively referred to as the “kids’ table.” “Her knowledge and the forceful way she made her case made me wish she were a part of the Big 10—even more so after seeing the Big 10,” wrote Jonathan Capeheart of the Washington Post.

It says a great deal about prevailing gender bias within the GOP that, thus far, Fiorina has sat on the literal sidelines, even as we’ve continued to reward her less-polished peers, many of whom appeared barely ready for primetime. The smartest man in the room wasn’t a man—and wasn’t allowed to be in the room.

This latent sexism was perhaps most obviously apparent in the way Fiorina was treated during the debates. The trio of Fox News moderators frequently referred to her as “Carly,” instead of using her last name or her title—as they did with the male candidates. For instance, the moderators would be unlikely to call Jeb Bush “Jeb,” even though going by his first name has been a huge part of his campaign branding. Throughout the debate, they referred to him as “Jeb Bush” and “Gov. Bush.” Donald Trump wasn’t “Donald”—he was “Mr. Trump.”

The smartest man in the room wasn’t a man—and wasn’t allowed to be in the room.

In a similarly patronizing act, the Democratic National Committee singled Fiorina out in their Twitter feed with a sexist tweet that attacked her controversial business record by juxtaposing her image with that of a little girl. Without intending to, both parties wound up underscoring one of the few areas where they overlap—in their difficulty taking the lone female Republican candidate seriously.

By contrast, no one seemed to struggle with the problematic pasts of three of the candidates on the Big 10 panel. Former Gov. Jeb Bush (R-Fla.) has a long history of anti-feminist comments, from suggesting that women who can’t get off welfare should “find a husband” to advocating that unwed mothers be publicly shamed. Sen. Rand Paul (R-Ky.) is well-known for his condescending behavior toward female reporters, from shushing Kelly Evans of CNBC to chiding Savannah Guthrie of Meet the Press for “editorializing.”

Meanwhile, Donald Trump was widely considered to be the winner of the debate, despite his refusal to take back comments that criticized female public figures for their physical appearance. During the debate, Fox News host Megyn Kelly brought up his unsavory record: “You’ve called women you don’t like ‘fat pigs, dogs, slobs, and disgusting animals.’” After joking that he’s only said those things about Rosie O’Donnell—to big applause—he argued that his views weren’t the real issue. “I think the big problem this country has is being politically correct,” Trump said.

He continued by attempting to turn the tables on Kelly. “What I say is what I say,” Trump responded. “And honestly Megyn, if you don’t like it, I’m sorry. I’ve been very nice to you, although I could probably maybe not be, based on the way you have treated me. But I wouldn’t do that.” He continued his tirade later in evening on Twitter, calling Kelly a “bimbo” and “totally overrated and angry”: “The biggest loser in the debate was @megynkelly. You can’t out trump Donald Trump. You will lose!”

While her peers continue to attack and demean women, part of the reason the Fiorina campaign is struggling to draw attention to the sexism directed against her candidacy is that Fiorina herself has a complicated relationship with gender politics. In June, Fiorina’s comments about feminism at a Washington D.C. event ruffled feathers on the Internet, as she seemed to blame feminists for the War on Women. “Feminism began as a rallying cry to empower women,” she argued. “But over the years, feminism has devolved into a left-leaning political ideology where women are pitted against men and used as a political weapon to win elections.”

Both parties wound up underscoring one of the few areas where they overlap—in their difficulty taking the lone female Republican candidate seriously.

Unfortunately for Fiorina, running as the anti-Hillary hasn’t yet proven compelling enough to garner her headlines, despite the fact that her male peers spent a great deal of last night bashing Clinton (never once mentioning Bernie Sanders or Martin O’Malley). Whether she chooses to recognize it or not, she will continue to be a victim of sexism at the same time that she calls out Hillary for using the gender card. Despite having similar qualifications to Donald Trump—in terms of her business background—Trump is leading the pack, while Fiorina is stuck babysitting.

Of course, this doesn’t mean that Fiorina should be president. There are valid criticisms of her performance as CEO of Hewlett-Packard, and without her business portfolio, there isn’t much to recommend. But this issue is about more than about her record. Just like the men she should have been standing alongside last night, she deserves the chance to prove she does—or doesn’t—have what it takes.