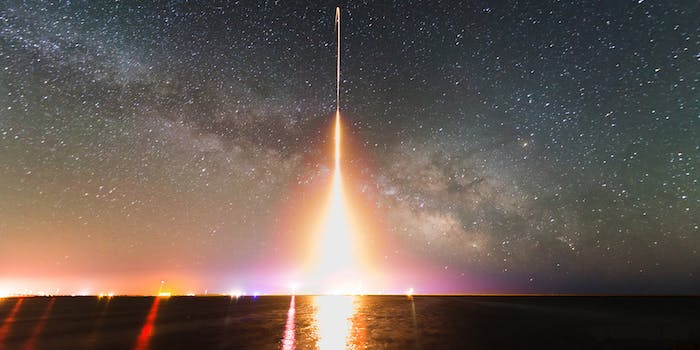 Can social media save NASA?

It's all about that space.

Last week, interns at NASA’s Johnson Space Center capitalized on a particularly fortuitous rhyme by turning Meghan Trainor’s mega-hit “All About That Bass” into the now-viral parody “All About That Space,” which trades booty euphemisms for lyrics about the recent Orion launch. For NASA, this parody is par for the course. The agency has been developing its social media presence since 2008 and have been been particularly adept at maintaining a public image in a digital age that is equal parts silly and informative. As NASA continues to struggle to secure adequate funding, “All About That Bass” raises an important question: Can social media help restore NASA to its former glory?

Even before the Internet, NASA was particularly skillful at using the media to keep the power of public opinion on their side. In a Forbes interview, David Meerman Scott and Richard Jurek, co-authors of the book Marketing the Moon: The Selling of the Apollo Lunar Program, make the case that the Apollo mission is “single most important case study for modern PR and marketing practitioners in the last 100 years.” By hiring former journalists to work as messengers during the Apollo missions, Scott and Jurek argue, NASA was able to maintain close ties with mainstream news outlets and promote a global brand of technological innovation. NASA also pioneered the use of real-time technology to broadcast the Apollo landing. In other words, NASA figured out how to be Apple before Apple did.

Post-Apollo, it’s no surprise that NASA has thrived in an Internet age that demands real-time, interactive marketing. In a May statement, NASA reported that they have continued to expand and grow their Internet presence since 2008, now using more than 480 accounts spread across 10 different social media platforms (a full list can be found here). Practically everything at the agency has a Twitter account—from the Hubble Space Telescope and the Lunar Orbiter to the astronauts themselves; most of these accounts boast tens of thousands of followers. And not only has NASA tweeted from space, astronauts have recorded Vines in space, taken selfies in orbit, and Instagrammed from space as well.

Their social media proficiency makes them unique among government agencies. For the past three years, NASA has won the “Shorty Award” for the best government use of social media. In an interview for the awards, NASA described how they carefully try to make their brand relatable through social media: “As a large government institution that’s all about science and technology, our goal is to endlessly remind everyone that we’re human.” And in terms of public perception, NASA might be the government agency that feels the most human to the American public—market research firm J.D. Power noted that NASA is one of the only government agencies they have studied that excels at engaging the public.

And apart from launching humans and robots into the stratosphere, engagement is exactly what NASA seems to do best. When it came to choosing the prototype for the spacesuit of the future back in March of this year, NASA turned to the Internet polls and let public opinion decide. In April, NASA created a “global selfie” for Earth Day by compiling thousands of selfies submitted under the tag #GlobalSelfie from over a hundred countries submitted under the hashtag #GlobalSelfie into a mosaic of Earth. In September, NASA launched a contest for K-12 students to create model designs for space tools that could be printed on a 3D printer to help astronauts at the International Space Station. The agency is keenly aware that in 2014, you can’t just post content anymore. You need to involve the public as well.

NASA is also particularly clever about how it cultivates this now-massive audience. They have been able to gain a whopping Google+ following of 1.8 million by making tactful use of Google Hangout sessions, all of which are then made available on their YouTube channel. In addition to livestreaming launches and rover landings, NASA also hosts its own online television channel—NASA TV—which hosts a variety of pre-recorded educational and public relations programming 24 hours a day. They have accrued over 8 million Twitter followers, ranking them in the top 150 Twitter accounts worldwide.

Why does NASA do so much self-promotion? NASA isn’t just courting followers for fun—the agency has always relied on public opinion to justify expensive exploratory missions, especially manned missions. As a percentage of the federal budget, NASA’s budget peaked during the Apollo missions of the mid-to-late ’60s, before dipping to less than half of one percent of the budget. As Neil deGrasse Tyson observed in a 2012 call for increased NASA spending, there’s a sense that bold space exploration is over: “Nobody’s dreaming about tomorrow anymore.”

More than anything, NASA’s social media strategy is about drumming up enthusiasm for bold missions that match the ambition of Apollo. In the current state of space travel, it makes sense that NASA would need to go all out to promote Orion. As Daily Dot writer Gavia Baker-Whitelaw notes, Orion’s successful test flight is “a big f**king deal,” as the Orion program implements manned missions farther than any spacecraft since the end of the Apollo program in the 1970s. It also costs $1 billion a year, and thus, NASA needs the public to believe in its dream again in order to justify its technological indulgence. In the 1960s, that meant real-time broadcasts; in the 2010s, it means putting space in everyone’s pocket.

It’s no coincidence that NASA is using its social media prowess to leverage filmmakers’ renewed interest in space travel for their own aims. In the past few years, Prometheus, Gravity, and Interstellar have all suggested a renewed surge of cultural curiosity in other galaxies. And there was no way in galactic hell that NASA would have let these premieres pass without plugging their real-life counterparts. As Gravity cleaned up at the Oscars this year, NASA livetweeted the ceremony under the hashtag #RealGravity to remind viewers that “space exploration isn’t fictional.” Around the time of Interstellar’s much-buzzed release, NASA issued a press release declaring that Orion should arouse similar excitement because it would allow astronauts to travel deeper into the solar system than ever before, “where extraterrestrial life may exist, and where humans could one day thrive.”

But even though NASA’s has cunning public relation strategies that would make even the Beygency cower in shame, the agency needs to exert even more effort now than it did during the Apollo missions. As Richard Jurek notes in the above-quoted Forbes interview, the NASA of today faces the challenge of juggling various programs that each have their own niche audience. Back in the ’60s, the moon landing benefited from a vast global interest narrowed down by the number of media platforms available at the time. The Orion program will likely be the first program that will once again appeal to a large global audience since the termination of the Apollo program.

The challenge NASA faces now is whether or not it will skillfully harness their public relations and marketing over the trajectory of the Orion program. If the Orion program gains enough public momentum, it could become the global culmination of all those tweets, Vines, and Instagram posts. As it ramps up for a manned Orion mission, the agency learned last week that it would receive a large budget increase. NASA might have reminded the federal government, as well as the public, to dream about tomorrow again, and they used the Internet to do it. In order to be all about that space, we need to dream we can get there.