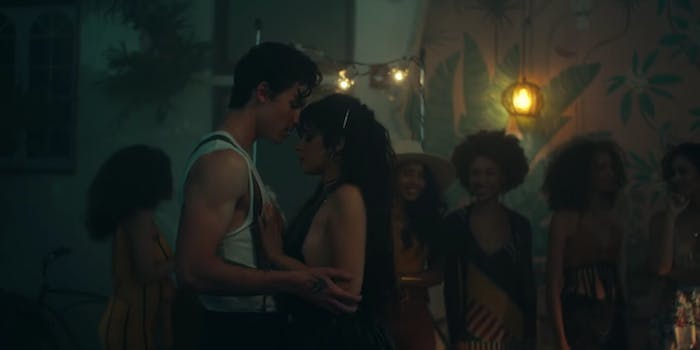 UMG (on behalf of Island Records)/YouTube

Camila Cabello and Shawn Mendes continue to prove they are the weirdest new celebrity couple.

In a video posted to Instagram, the pop stars attempted to address the jokes about how they “kiss like fish” by showing viewers how they really get down.

“We just want to show you how we really kiss,” Mendes said, before him and Cabello shared what can only be described as two carp fishes kissing.

Needless to say, their kiss didn’t get half the reactions that Timothée Chalamet and Lily-Rose Depp’s kiss did.

“I was JUST about to fall asleep and then I see a video of shawn mendes and camila cabello kissing like they are human window washers,” said YouTuber Ryan Abe.

The other reactions ranged from disgust to confusion.

trying to go through my tl without seeing Shawn and Camilla’s gross ass kissing pic.twitter.com/XF73yWYQKx

The couple has been making news lately after rumors began to swirl that their entire relationship was simply a PR stunt to promote their own careers.

However, Cabello brushed off her critics in a recent interview with Elle. She told the publication, “people can say whatever they want to say” about her relationship with the Canadian pop sensation.

“They can speculate, but at the same time, we are going to live our own lives, enjoy it and fall for each other like nobody is watching,” she said. “That is how I want to live. I never want to open the door for people to feel like they are involved. Like I said, I want it to be mine and [his]. That’s why I’m so tight-lipped about it because I want to protect it.”

But with that being said, while the two have been captured rendezvousing all over the country–just like this new kissing video and just like Cabello’s revealing Elle interview–none of it has been enough to convince fans that they are the real deal.

I AM SO DONE WITH THIS CAMILLA AND SHAWN PR MOVE RELATIONSHIP, PURE CRINGE I TELL U

Though despite the rumors, the two still managed to top the charts with their new hit single “Señorita”. And though this video might have failed to convince people they were really a couple, the “Señorita” music video has hit nearly a half a billion views on YouTube, meaning someone is doing something right.