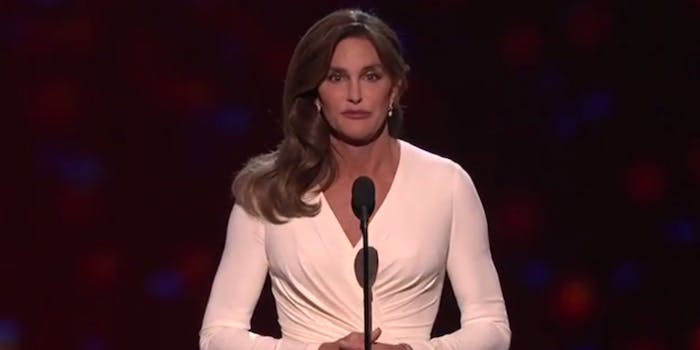 The backlash against Caitlyn Jenner proves she deserved her ESPY Award

History will look favorably upon her profile in courage.

Caitlyn Jenner is a profile in courage.

After the Olympic gold winner shared her story with the world in a heartfelt interview with Diane Sawyer, Jenner stood on stage to accept the Arthur Ashe Courage Award at the 2015 ESPYs. But in the lead up to her big moment, and as social media reacted in real time, celebrities and everyday people alike raised objections to her receiving the honor.

While much of the resentment was rooted in ignorance about trans people, other responses questioned why other active athletes were overlooked in favor of the now-retired reality star. But the social sentiment overwhelmingly proved that transphobia—both in and out of sports—indeed remains alive and well.

Sorry to everyone who thinks of @Caitlyn_Jenner as being courageous, but she will always be a man named Bruce in my books.

Bruce Jenner or whatever that thing is calling himself is not a hero. He's a confused man child. Our heroes=military. #CaitlynJenner #ESPYS

The response to Jenner’s accolade proves why she more than earned the Ashe Award in the first place. With the history history of how broader social inclusion often correlates with advancements in athletics, Jenner’s action and advocacy may very well have a ripple effect in the sports world for many years to come.

As Jamilah King writes at Mic, Jenner has indeed been praised for her courage in news outlets, and her affect on the sports world will arguably be even more meaningful—because American sports remain dominated by the supremacy of masculinity.

King explains why Jenner’s triumph at the 1976 games strongly resonated with a mainstream audience during the Cold War:

Jenner… came to prominence in the 1970s as an Olympic decathlon gold medalist, the epitome of American masculinity … It was a chance for the country to flex its muscles at the Soviet Union. Jenner became an American hero thanks to the gold medal performance. As outlets like ESPN came into existence, Jenner became a household name, famously appearing on the cover of Wheaties boxes in the 1970s; the cover of Sports Illustrated; and Playgirl, in a feature titled “The Fall and Rise of an American Hero.”

How quickly we, as a public, forget. In the time since the peak of Jenner’s athletic career, the Olympian has been most associated in Americans’ memory through the hit reality show Keeping Up With the Kardashians. But Jenner was a household name for generations of people, well before many of the Kardashian and Jenner children were even born. And for many people today, including those who were fairly young during the 1976 Olympic Games, Keeping Up is their primary touchstone for Jenner’s life and story.

For that reason, some naysayers—including famed sports anchor Bob Costas—sniped at Jenner’s ESPYs recognition, bemoaning that she’s not an active athlete and that the award was simply an “exploitation play” to capitalize on the growing public interest in transgender people, as well as the Kardashian franchise. But that criticism ignores the broader context and importance not only of Jenner’s legacy, but also the importance of inclusion of people of various sexual orientations and gender identities—in sports and in broader society.

“If Caitlyn Jenner’s speech was about upping ratings, who cares,” Dina Gachman writes at Forbes. “It also brought attention to an important issue that activists like Janet Mock and Laverne Cox have been speaking about since they found themselves in the spotlight as well. If that creates buzz and huge ratings, we’re probably headed in the right direction.”

Indeed, many other trans advocates, for decades, have been working earnestly to ensure the community’s issues are understood beyond the sensationalist tropes that focus on trans bodies, outside from the everyday lived realities of enduring social and institutional discrimination—and violence.

During her acceptance speech, Jenner highlighted that she, like many others, is finding herself on a learning curve, emerging from years of isolation as a trans person to become part of a wider community. And during her moment in the spotlight, she reminded everyone that—even as she has struggled as a trans woman and must still endure the indignity of ridiculed by the public—she is in a position of relative privilege as someone who is white and affluent.

Others who are trans, gender non-conforming or intersex, however, don’t have it nearly as easy, especially many young people and trans women of color, who experience disproportionately high rates of bullying, suicide, sexual violence, and murder, because of who they are.

It was Jenner’s way of amplifying the longtime concerns of many community advocates, who don’t have the same notoriety or access to major platforms. In many unfortunate ways, trans political issues have been sidestepped or ignored in the mainstream—such as street harassment, access to affirming health care, employment protections, and many other basic civil rights people who aren’t trans often take for granted. Jenner now has the opportunity to use her power and privilege to help uplift and create space for her peers, and an emerging generation of trans young people.

Props to Caitlyn for using her speech to talk about bullied trans youth AND challenges facing transWOC specifically👏🏾 pic.twitter.com/qQQ0vymtEf

As Jenner reminded the ESPY Awards audience, sports can be a vehicle for social change. And as American history has demonstrated thus far, the slow and steady political rise for marginalized groups often follows from institutions that bear roots in masculinity and sexism—namely, the sporting industry and the American military.

Jenner’s speech—delivered in a room filled with athletes, sports industry executives, and their families—came during a week when the Pentagon said it was considering lifting its ban of military service members serving openly as transgender people. It was a long-awaited reversal that followed roughly four years after the Obama administration put an end to the “Don’t Ask, Don’t Tell” policy for gay, lesbian, and bisexual service members.

As Jenner reminded the ESPY Awards audience, sports can be a vehicle for social change.

In 1948, a law was passed to make women a permanent part of the military services. And that same year, as the Civil Rights Movement continued brewing, President Harry Truman signed an executive order to desegregate the Armed Forces.

As the military has gone, historically, so has the largest civilian display of masculinity in America: athletics. Major American sports leagues have historically served as a critical access point for marginalized groups.

Michael Sam was selected in the NFL draft in 2014, making him the first openly gay prospect to do so; however, he was cut by the St. Louis Rams at training camp. Last month, Sean Conroy became the first active professional baseball player to come out as gay.

Even as a number of trans athletes have come out in recent years, the community’s inclusion in sports has a long way to go. As Ashland Johnson wrote at the Huffington Post:

The metaphorical closet for the transgender sports community is as solid as ever. There are still only a handful of openly trans athletes, active or retired. Even less have ever competed at the professional level. To date, no openly trans athlete has ever competed in the Olympics. Trans visibility might be increasing in everyday society, but this trend is not translating to the sports world in the same way it has for LGB players.

Caitlyn Jenner follows in a notable trend where many LGBT athletes opt to come out after their careers have ended, because keeping their identity hidden was the only way they could survive as competitors, as athletes, and as people. Now that Jenner is able to share who she is with the world, after an illustrious athletic career, there’s hope that her story will compel others to work toward the full incorporation of trans people.

If her sporting achievements made her a household name, her speech proved that her most important work is still ahead of her.