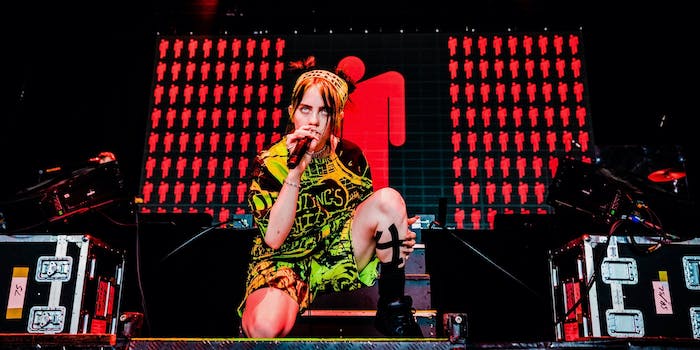 Some are shaming her for how she looked in a paparazzi shot.

Fans are coming to Billie Eilish’s defense after some have used a recent paparazzi photo to body-shame Eilish’s appearance.

The paparazzi photo is fairly innocuous. Eilish, who’s wearing shorts, a tank top, socks, and sandals, is walking in Los Angeles; it’s pretty standard stuff. But in a Page Six framing of the photo, Eilish “shows some skin” and “ditches her baggy clothes.”

On Twitter, the photo is being used to shame Eilish for not looking like Hollywood’s ideal for a musician or star: Someone who’s stick-thin.

Eilish often wears baggy clothes when she performs. She’s spoken at length about why she does so with reasons ranging from the fact that the clothes “gives nobody the opportunity to judge what your body looks like” and calling out those who use her style to slut-shame those who wear more revealing clothing to her own discomfort and insecurities about her own body. She’s also hyper-aware of that inevitable criticism that would come if she changed up her image or style.

“I can’t stress it enough,” she told Dazed in April. “I’m just wearing what I wanna wear. If there’s a day when I’m like, ‘You know what, I feel comfortable with my belly right now, and I wanna show my belly,’ I should be allowed to do that.”

Fans and critics alike took to social media to call out the people body-shaming Eilish for her weight or how she dressed. They also highlighted unrealistic standards about women’s bodies for the shaming of her appearance.

“Billie Eilish is beautiful!” Jessie Paege wrote. “PLEASE, do not body shame her, or anyone for that matter. Body shaming is not “news” or “gossip” it’s HARMFUL and UNACCEPTABLE.”

One of Eilish’s latest posts on Instagram Stories is a week-old TikTok video from Chizi Duru, who called for the normalization of “real bodies,” seemingly a response to the comments directed toward Eilish.

“Y’all got to start normalizing real bodies, OK?” Duru said. “Not everybody has a wagon behind them, OK? Guts are normal. They’re normal. Boobs sag—especially after breastfeeding. Instagram isn’t real.”