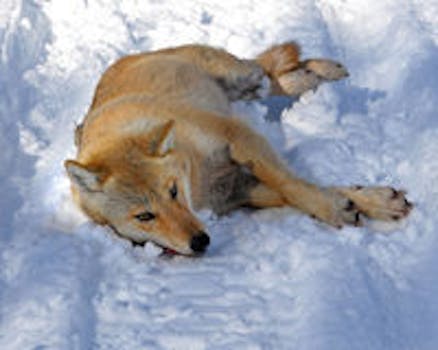 Aligned with the group that helped to bring Steubenville's rape case into the public eye, the Anonymous sec OpBeast is committed to saving endangered wolves.

Maturing from their birth in the dungeons of 4chan a scant decade ago, Anonymous has recently become the Internet’s most active crusaders. Recently, the hacktivist organization has helped reunite a British girl and her mother, exposed a group of cruel kitten-abusing teens, come to the rescue of a young girl who was bullied nearly to the point of suicide, drawn global attention to a rape in Steubenville, and stood vigil at funerals in Newtown, Conn., to keep the Westboro Baptist Church away from those mourning the deaths of children at Sandy Hook.

Now they’re once again speaking out for those without a voice in #OpBeast, a 2-week-old op that focuses on exposing and eliminating animal abuse of all kinds, including bestiality (which is legal in several states in the U.S.). It sprang from two earlier Ops: OpVoiceless, a general anti-animal-abuse op, and the highly specific OpOutrageBestiality, and is led by Twitter user Forever_Way, who estimates there are between 50 and 100 people directly active in this Op, as well as many hundreds who support in smaller ways, like retweeting or sharing the information on Facebook or their blogs.

This past weekend, they doxed Anders Ljung, the publisher of the Swedish Hunt and Hunters magazine, for his support of the killing of Susi, “the most important wolf in Europe.” Susi became politically radioactive when the indigenous people complained that she and her mate were killing the reindeer on which they depended, but according to supporters, the wolf stocks of Scandinavia are so depleted that her DNA is essential to the survival of the species. “He wanted to kill, Susi wanted to survive. Now he hates Susi. We bit back. Anders Ljung, expect us,” tweeted OpBeast.

We chatted with Forever_Way in an IRC, and here’s what s/he had to say about the relatively new operation.

Daily Dot: When did you start OpBestiality, and what does it take to get an Op started? A website? A crew? An IRC? A Twitter account?

An op takes an idea. The matter of your choice of exposing your idea is your choice. I’ve had barrages of people wanting to help, including Bullyville [the influential anti-bully account run by former Marine James McGibney, who recently won a six-figure judgment against revenge pornographer Hunter Moore]. It’s constantly growing. It won’t stop. Ever.

DD: It’s inevitable to me that it will eventually be outlawed in all states. It’s a states’ rights issue, isn’t it?

It’s a global issue. Animal abuse is all over. We are currently working on a few Denmark cases and a Swedish case. Heard of Susi the wolf? Susi is a wolf that the Swedish government wants to kill to use her genetic material, same as 16 other wolves. There is a court ruling at the moment. We are also working on a magazine that wants to hunt Susi and and puts down the organisations that are pro-Susi.

DD: Was there a particular case that got you into this, that inspired you to become involved?

Well, I was working on an op for almost a year which focused on bestiality.daily I saw evidence of these animals being abused. I fought furiously to take down websites and bring down ppl that were involved in these acts. The most success we had was a d0x on a company called ‘Ecatel.’ Then I went into a depressive state, not going to go into that, and started this op after that episode. They are a hosting company who hosts child pornography and bestiality and a lot of other cruel things. I coped after a while. It’s a topic i’d rather not go into. But after that I came back rather surprisingly to my contacts. Lol. And I just started a tweet on animal abuse and it formed in my head.

DD: So it sort of coalesced into OpBestiality?

Yes. Made it broader and revamped it. This op is for ALL animal cruelty. We have a case about dog hunters that eat and kill dogs.

DD: What’s your mission statement, if you have one?

Directly from the Mission Statement: We will not tolerate any behaviour of this sort from any person. We vow to minimalize the amount of animal abuse, and ultimately help stop it. We will do whatever it takes to bring down the filth that is polluting the world.

DD: Is there a point where you’d ever say, “OK, my work here is done”?

Until it is peaceful in the world, my work is never done.I am tired of seeing the human race trying to dominate everything. I’m trying to take the horror off of the animals. Humans are not the only beings.

DD: What are the specific actions OpBeast is working on now? Like IRL picketing or doxing offenders?

Both are necessary for me. I usually stick behind the screen. On Halloween I was spreading word though, through pamphlets and flyers. People can support by telling people about the terrible things that happen to animals. It can be as simple from signing a petition or tweeting, or even attending a future protest.

DD: How does someone send you an idea? Through Twitter, or is there a Facebook or web submission system?

It’s usually discreetly. I can’t reveal my ways mostly. Usually DM [direct message] and pastebin though, or they can contact me at [email protected] with ideas.

OpBeast’s supporters continue to tweet animal-related outrages, petitions, trackers, and abusers, as well as taking action in “meatspace”; given their beat, it’s sadly unlikely they’ll run out of material any time soon.

Photo of Susi the Wolf via The Petition Site