Two teenage girls at a U.K. boarding school filmed themselves throwing an 8-week-old kitten in the air until it lost consciousness. Naturally, Anonymous got its hands on the video.

Two teenage girls at a U.K. boarding school filmed themselves throwing an 8-week-old kitten in the air until it lost consciousness. Naturally, Anonymous got its hands on the video. And within 24 hours, the hacktivist group gathered enough personal information to bring the girls down. Hard.

The hacker group has had a busy month. On Monday, it took a short break from continued efforts against the Steubenville football team, Israel, the Westboro Baptist Church, and the FBI to petition the White House to declare DDoS—distributed denial of service—attacks a form of free speech.

But on January 10, Anonymous became aware of the kitten footage, taken in August 2012. It shows the two girls—students at the private Isle of Sheppey Academy on the Kentish coast of England—throwing a kitten back and forth from one room to another.

The girls throw the feline at the ceiling, hold it upside-down by the tail, and whip it left and right until it finally loses consciousness. The girls laugh hysterically and joke about their actions. They continue to throw the now-unconscious kitten until one of the girls stops to show off a scratch on her hand. (Poor thing.)

It was taken offline this week, but not before Anonymous copied and re-uploaded it (warning, it is shocking). Then it went to work going after the perpetrators.

“Preparing a paste: ‘Don’t fuck with the kittens Dox’ #MindSec,” tweeted MindSec at about noon. It didn’t take long. Anonymous supporter @NikkiSpannuth was the first to identify the school, @phantomofdalulz helped locate info on one of the girls, and a few minutes later, @iamblondie tweeted the girls’ names. You’d think that wouldn’t leave much ground for the dox to cover. You’d be wrong.

The intro to the dox invokes the cat’s sacred status on the Internet:

When it dropped, the dox, which can be found on Pastebin, included the full names of the two kitten-throwers and their camerawoman, their grade in school, social media accounts, names and addresses of their relatives, full contact details for the school and principal, and more. The dox contains more than 500 words, including this inspirational quote from one of the girls: “My option subjects are helping me on my way to achieve my ambitions,” which is featured on the school’s website. According to the RSPCA (the Royal Society for the Prevention of Cruelty to Animals), the girls, now 15 and 16, have pled guilty and are now forbidden to keep animals for a year, among other restrictions. Their videographer has yet to appear for sentencing. The case came to the attention of the RSPCA and the police when, predictably, the girls uploaded the video to Facebook.

Anonymous, once the world’s most feared troll collective, is turning to social-justice-focused activities such as OpFreeAishah, OpRollRedRoll in Steubenville, OpRIP in memory of Amanda Todd, and interceding on behalf of bullied children and teens. The collective is keenly aware that it’s getting a different kind of feedback and support from the public, causing some old-timers to wonder what ever happened to the beloved, and amoral, trolling it was once known for.

The kitten, meanwhile, was examined by a vet and found to be in remarkably good shape, considering its ordeal. It has since found a new home. 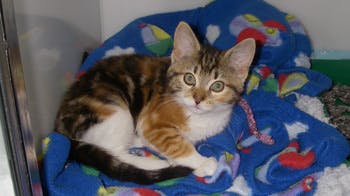 Update: Out of respect for the relatives unintentionally affected, the Daily Dot has removed the link to the Pastebin document Anonymous released.

Photo via AnonZapata/Twicsy. Kitten via RSPCA. Screenshot via Anonfiles.