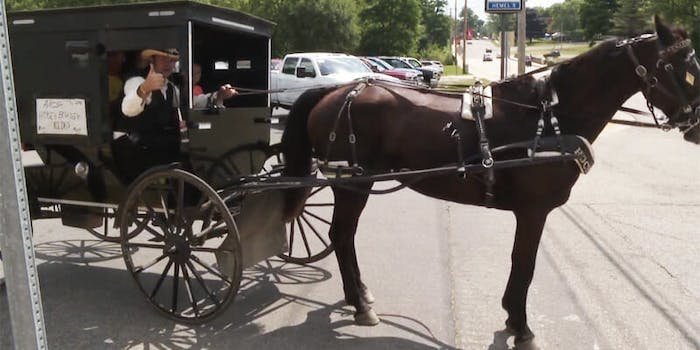 No engine, no problem.

Although ride-sharing services such as Uber and Lyft initially gained popularity in larger metropolises, now passengers can hail a ride with a click of a button in most cities and suburbs across the country. Unfortunately, though, ride-sharing is still not typically an option when it comes to small towns and rural areas.

That’s where Timothy Hochstedler comes in. Hochstedler, who lives in an Amish community in south-central Michigan, has started a service that he likes to call “Amish Uber.” Although he is not actually affiliated with the company, Hochstedler cheerfully transports people around the quaint, small town of Colon in a horse-drawn buggy for a cool $5 per ride. He sees it as a way for people to experience the town without the added distraction of being behind the wheel.

“Uber is a cool thing, every single year something new comes in and Uber is hot right now, so we have the Amish Uber,” Hochstedler told WSTM 3 News. “We can deliver people to their front doorsteps.” He added that his horse, Morgan, is a “people’s horse” who loves giving kisses.

The service is already popular with tourists. A man named Bruce Jordan traveling from Grand Rapids took his grandchildren on a ride. “It was fascinating,” he said of the experience. “It’s not an activity you typically associate with the Amish.”

Another passenger, Becky Phelps, said that Hochstedler’s service is “pretty cool” since Uber isn’t available in the area. “It gives people that option that can’t drive or don’t want to drive or shouldn’t drive,” she noted.

As to how you actually procure an Amish Uber ride, well, that’s a bit trickier. Given the whole “Amish” thing, Hochstedler understandably does not use a cell phone, so passengers have to literally flag him down when they see him. Likewise, one would have to assume that it’s a cash-only service. Still, it seems all worth it for a little bit of local charm.