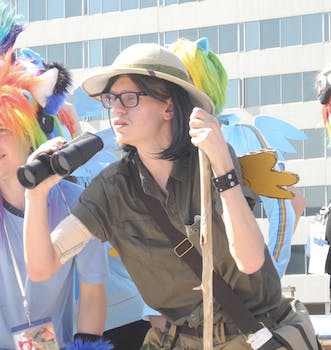 The changing face of brony fandom

As more people discover My Little Pony: Friendship is Magic, brony fandom is entering a more social and sincere stage of growth.

Clad in a wig and a pony tail, he bounded around the Baltimore Convention Center, looking for others of his kind. At Otakon, an annual convention for anime and gaming fans last month, Leonhart found no shortage of fellow bronies—adult fans of the children’s television program, My Little Pony: Friendship is Magic.

Donning safari gear, binoculars, and bandages on his arm and cardboard wing, 25-year-old Leonhart was dressed as Daring Do, the Indiana Jones of the pony world. Other bronies seemed just as delighted to see him as he was to see them. Photos were snapped.

“A common stereotype about bronies is that we are sit-at-home guys who do nothing but watch My Little Pony and live off of welfare,” Leonhart told the Daily Dot. “A lot of bronies are normal people.” 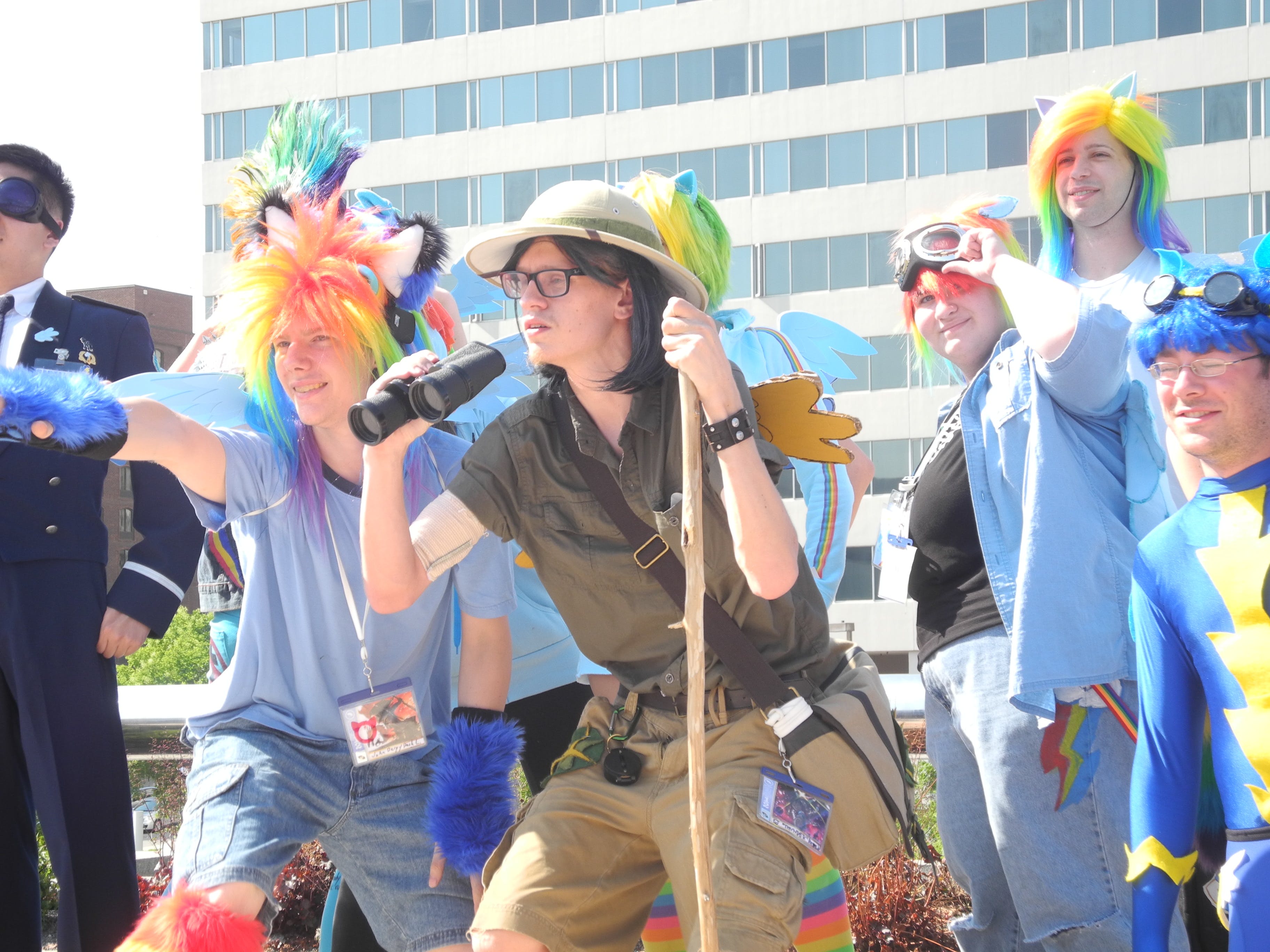 In the two years since Friendship is Magic first aired, brony culture has been anything but static. From a small community on imageboard 4chan in 2010, the fandom has since spiraled out over the Internet and at fandom conventions, attracting people from every walk of life.

Dr. Patrick Edwards, a clinical psychologist who has been studying brony fandom for a calendar year, said he observed that the larger the group gets, the more social it becomes.

“When you go to a con, you tend to see these more social bronies,” he told the Daily Dot. “They’re newer to the fandom, younger, and more upbeat. It’s the direction I suspect the fandom is going.”

Edwards, who has just closed his third survey of the fandom at his site, Brony Study, has observed more than 20,000 bronies. He said the data supports a correlation between a brony’s recency to the fandom and his or her sincerity.

“The data seems to support the idea that earlier bronies got into the show ironically, as a humor mechanism, whereas newer bronies wholeheartedly buy into the show’s moral message of love and tolerance. For the newer bronies, this fandom is no joke.”

Leonhart may call himself “Derpydash” online, but the Burtonsville, Md. electronics dismantler doesn’t take the children’s show lightly. When we sat down nearby a brony photo shoot to chat, he explained why he got into the fandom during season two.

“It reminds me of Star Trek,” he said. “Each episode is a moral play, setting values and bringing them to the younger generation. It makes me very hopeful for the future.”

As another brony walked by where we’re sitting, Leonhart introduced me to his brand new friend, Evan “EJ” Reynolds, a 20-year-old college student wearing a spiky rainbow wig with colorful leg and wrist warmers. He’s Rainbow Dash, the athletic flying pegasus of the pony world.

“We just met yesterday at the convention and have been hanging out together ever since,” Reynolds said. 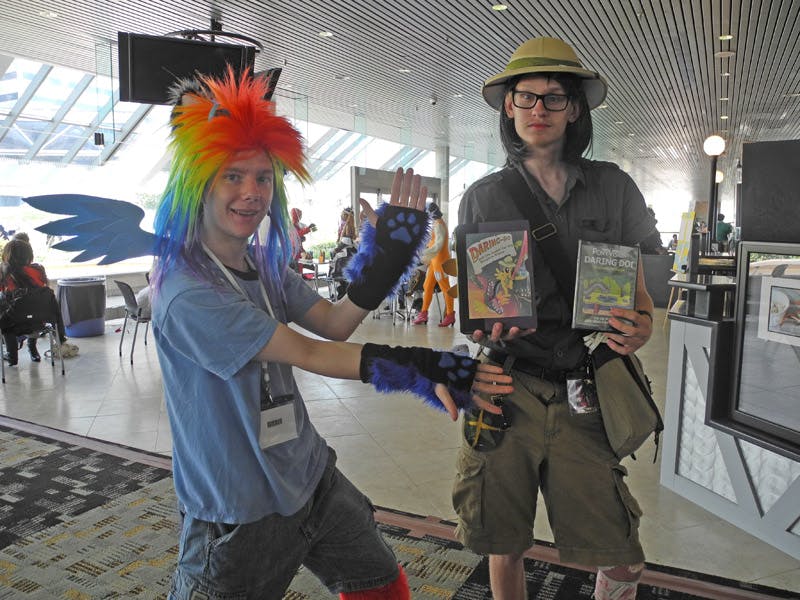 Reynolds is also a recent brony convert. He discovered brony fandom at Otakon last year when he saw a lot of people wearing colorful rainbow wigs like his own, but at the time he didn’t have any idea what it was.

“It turns out, I realized, there’s this huge male population of bronies,” he said. “I started seeing them everywhere I go online, like Halolz, YouTube, and even just talking with friends.”

A group crowded around Reynolds, Leonhart, and me, after Leonhart introduced me as a reporter.

“Do you think we’ll be on Equestria Daily?” somebody asked, referring to the fandom’s largest news blog, run by a fan called Sethisto. In this circle, older bronies like Sethisto, fan artist Pixelkitties, and fan composer The Living Tombstone are considered celebrities. .

“At Summer Bronycon, the Living Tombstone cut in line for an autograph from [show voice actress] Tara Strong because he was in a hurry, and everyone just let him go,” Leonhart said.  “Nobody was angry, they were just gasping, ‘OMG it’s Tombstone.’”

Edwards said this elevation of early members is a sign that the brony fandom is entering another stage of growth.

“One of the thing that happens when a fandom is going from a loose organization to a bonafide community is that members want to have a sense of leadership,” he said. “They desperately want people they can look to in order to identify the people who brought them all together, to prove this isn’t something random.”

“Does every Star Wars fans automatically get aroused by the blue alien woman?” Reynolds countered. “Why can’t our fandom be treated like any other fandom? Every fandom has Rule 34 material as well, but for them it just gets ignored.”

Edwards said this is a rite of passage for every community. 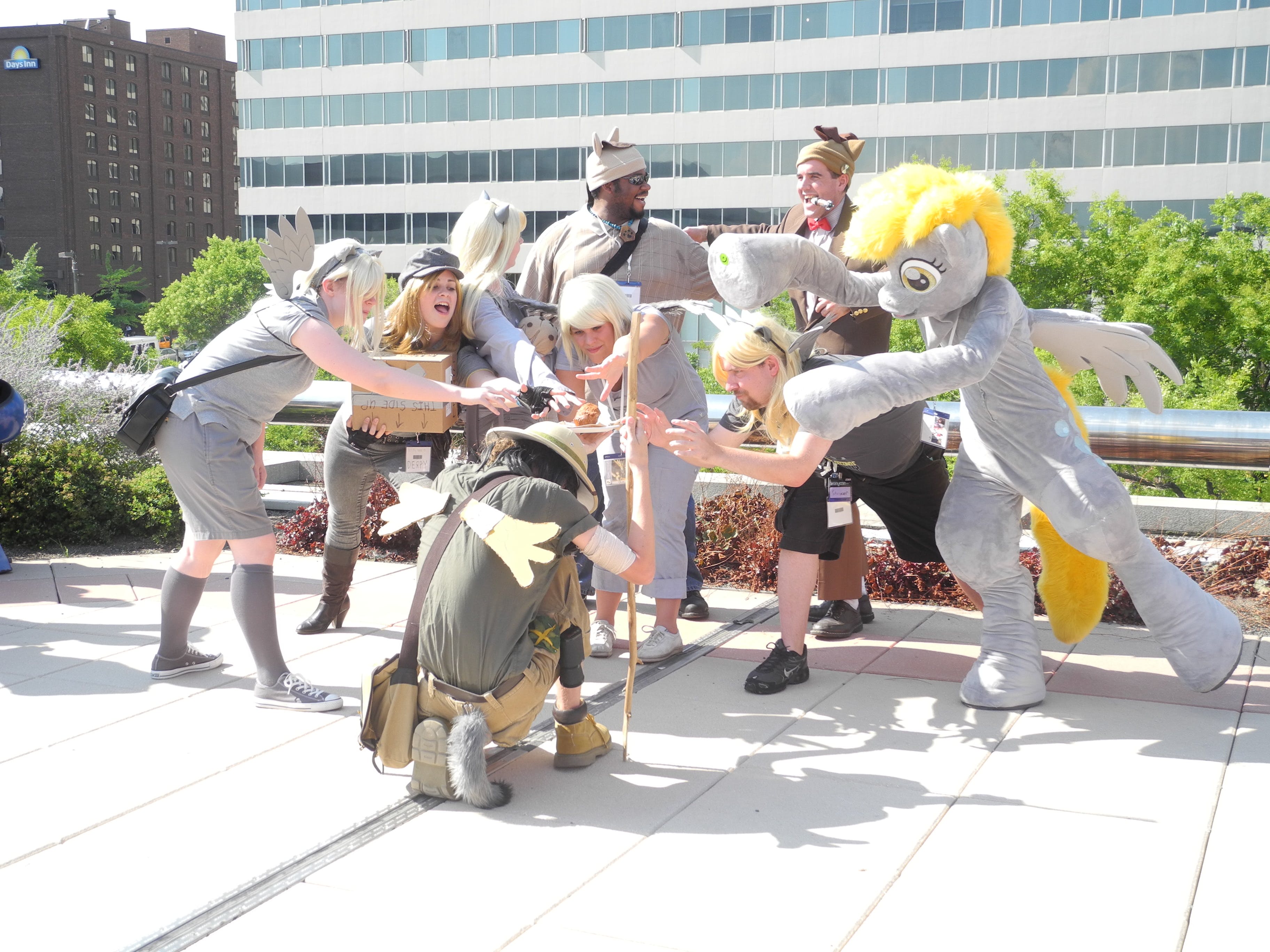 That afternoon, I ran into Leonhart and Reynolds again. Braving the sweltering triple-digit heat on the convention center’s outdoor terrace, hundreds of costumed bronies posed for group photos, grinning and squinting into the sun.

The spotlight was on the brony community, and they were ready to face it—straight on. .