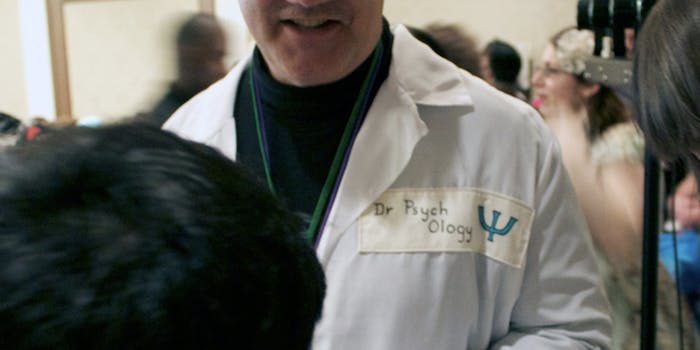 Just as anthropologists visit lands to discover new peoples, two researchers are delving into the Internet to understand the ways of bronies, adult devotees of My Little Pony.

Last summer, Dr. Patrick Edwards had never heard of bronies, the teenage and adult fans of My Little Pony: Friendship is Magic.

“We’d come back from summer vacation, and he announced it to me,” he told the Daily Dot. “I said, ‘Will, what have you been up to?’ He told me he’d been drawing pictures of ponies. I had the same reaction most people do: What?”

Edwards isn’t alone in his confusion. The Hasbro show aimed at little girls, has developed a massive grown-up audience of bronies (bro-ponies), that might be described as a full-on cult. And nobody’s sure what to make of them.

One thing is clear: bronies have become an online community too big to be ignored. Stephen Colbert gave a shout out to his bronies last fall on his show. Even Fox News attended January’s Bronycon to learn more about the phenomenon.

Edwards, who teaches undergraduate psychology at Wofford College, went to tell his colleague, Redden, about Will’s big reveal. Though Redden is not teaching this semester, the two share an office wall and frequently discuss the intersection of culture and psychology. Redden was equally surprised—and intrigued.

The two did some Googling and decided to dive deeper.

Neither researcher could have anticipated what happened next. In the months that followed, each began to sympathize with the kind, friendship-loving brony community. In turn, the community has rewarded them with a front-row seat to brony culture as it is created. Said Edwards:

“Rarely have scientists had the opportunity to study a fan phenomenon from its inception. We’re using this survey to study [the brony community] from the beginning and see how it’s evolving.”

After getting over his initial shock, Edwards began to support his son and the community. He even watched the show’s first season (he’s been too busy with research to watch Season Two), and approves of its message of moral guidance: most episodes conclude with one of the ponies learning a valuable lesson about being a good friend, a pro-social attitude Edwards admires.

When he posts on brony forums like Ponyville, he uses a pony avatar named Dr. Psych Ology, a white unicorn in spectacles and a lab coat with a psychiatry symbol tattooed on its flank. (In the show, when each pony comes of age, a tattoo or “cutie mark” appears with a logo of her life’s purpose. Bronies often discuss what their own marks would look like.)

He talks about the survey often in class, and his students sometimes ask if he’s a brony himself.

“One of the most common questions I get from students is, ‘Are you a brony,’ and I say no because I have to keep my objectivity, but I am a brony booster.”

Redden, who does not watch the show, said she thinks both researchers’ clinical backgrounds, which include adolescent therapy, have prepared them to be open minded. After several months of studying bronies, she doesn’t think, based on scientific evidence, that the group is as weird as they’re made out to be by some.

“We really do regard ourselves as scientists first and foremost, and we have a duty to report what this is without a lot of bias,” she told the Daily Dot. “But what we’re seeing isn’t as bizarre or strange as people think.”

Instead, Redden believes that the fandom is a normal response to the anxiety of life in a conflict-driven time, she said.

“I think bronies are a reaction to the U.S. having been engrossed in terrorism for past ten years, living on the edge the same way my generation lived through the Cold War. They’re tired of being afraid, tired of angst and animosity. They want to go somewhere a lot more pleasant.”

At first, Edwards said, bronies were leery of the survey. When he first posted it on Ponyville, Reddit, and Facebook, some worried it was a ploy to make them look bad.

“I tend to ignore [surveys] as they never end up being good for the community,” wrote one early commenter. It wasn’t until Edwards’ son, under his avatar, Johnny Hoof, assured bronies that the survey was legitimate that commenters gave it a chance.

“Several bronies have told us that when scientists come in and try to investigate things, they end up saying negative things. They come in and try to take away enthusiasm by simplifying things. One thing we struggled to do was tell the bronies that was not our goal,” said Edwards.

One way Edwards and Redden attempted to acquire the bronies’ trust was by leaving sex almost completely out of it. While sexual fanfiction and fanart are a large part of the brony community (and every fan community, as Redden observed), the researchers didn’t want to scare participants away with the tough questions, for example, about whether fans have sexual feelings toward the show’s equine characters.

Edwards and Redden blame the media—and reporters like this one—for bronies’ wariness. The two said that reporters are looking among bronies to find outlandish characters, while they as scientists are looking for a fair representation of “the herd.”

“In general the media has not been kind to bronies, especially Fox News,” Redden said. “One of the Fox people even mentioned drug use, which has absolutely nothing to do with any part of the culture. We know the media wants a character, but we get frustrated because that’s not an accurate representation.”

Edwards hopes the media will learn from the study’s objective example, he said.

“I think if and when media makes a more positive presentation, bronies will come out speak openly about their experiences.”

Based on the community’s suspicious nature, Redden predicted the survey would get one hundred responses at best. But in the end, the researchers’ pro-brony attitudes won over the community.

Just thirteen hours after the survey was posted on Friday, Nov. 4, the researchers said 400 people filled out the ten-page survey, which delves into everything from personality traits to video game preferences. Since then, 3,500 people of both brony and non-brony identity have completed it. Though the lengthy survey is anonymous, several participants have reached out through email to Edwards and Redden, who keep in touch. Said Edwards:

“One brony told me, ‘My dad would never understand and accept this. My military buddies wouldn’t understand.’ He’s not open about it. It’s almost a little like what you used to see in the gay community.”

Even though the brony community had made him “jump through a lot of hoops” to gain their trust, at BronyCon, Edwards felt he’d finally achieved it.  Edwards, his wife, and their son Will, made the drive up from Spartanburg, South Carolina to Manhattan so he could attend as a panelist and report the survey’s findings.

“When I got up and made the presentation, the reception was overwhelming. I got a standing ovation. I think the bronies realized we weren’t going to put them down,” he said.

In the next few months, Edwards and Redden plan to release a followup survey. Now that they’ve become a part of the community, they feel comfortable including less innocuous questions and even exploring what Edwards called “the dark side” of brony fandom. The two also plan to publish their findings in scientific journals and eventually write a book about the phenomenon.

“A few months ago, we had no idea what a brony was or that it existed,” said Edwards. “Now, I was just telling a colleague that Marsha and I are the nation’s premiere bronyologists.”