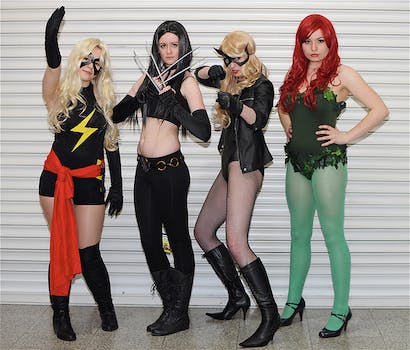 How fangirls uphold the Internet’s Rule 34

James is a fangirl who hit the big time.

Urban Dictionary defines a “fangirl” as “a rabid breed of human female who is obsessed with either a fictional character or an actor.”

It doesn’t take a linguist to see how derogatory a term the definer considered it to be. It’s clear that James became successful in spite of her fangirl past—not because of it.

Or at least that’s what media studies scholar M. Flourish Klink would argue. A lecturer at MIT and self-described fangirl, Klink said there are double standards in fandom culture.

“We’re used to knowing that Quentin Tarantino is a fanboy,” Klink reasoned to the Daily Dot.

“And Joss Whedon, and David Tennant, and lots of other men who don’t make a secret of the fact that they were total nerds before they made it big. But women who start off as fangirls usually have to hide it. I think that’s a shame, and that it adds to fangirls’ invisibility.”

Fanboys are ubiquitous. “Apple fanboys” appear in the headlines every time a new iPhone comes out. With the advent of The Big Bang Theory, fanboy culture has hit primetime, and with Fanboys, the silver screen. A new documentary, Comic Con IV: A Fan’s Hope, features mostly male fans. Even Urban Dictionary’s definition for “fanboy” is more lenient.

But if you want to find a fangirl, you’ll have to search a little harder. Klink said she thinks the way women tend to interact with media is not broadcasted as widely.

Things like fanfiction stories are curated and shared among “Friends Only” LiveJournals and anonymous Tumblr blogs. Even today, she said, a large percentage of female fandom remains on 14-year-old LiveJournal, thanks to the site’s comparative privacy for users.

“One of the things that made LiveJournal so appealing is that it was just about the first community that allowed people to make posts only visible to their friends—which is really important to fangirls,” she said. “People still get fired from their jobs, especially if they work in early childhood education, for being fans, especially if they write erotica or slash.”

It’s just one of many examples of the boundless power of fangirl creativity, a culture that is as limitless as Rule 34 and as globally influential as Fifty Shades of Grey. It’s no wonder Klink wants to take the word back.

“I feel like usually when people use the word ‘fangirl’ in a dismissive way, it’s usually a really gendered insult—it’s about how ladies are inappropriately overemotional, yeah?” she asked. “So I kind of want to reclaim it. Personally.”