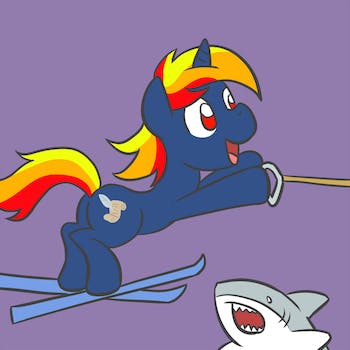 Every fandom struggles with the same life cycle. Here's how to know when one is on its way out.

Discovering a new fandom can be like getting a new lease on life. Suddenly there are new episodes or chapters to analyze, new ideas for fanart and fanfiction, and an entire new community of fellow fans to meet.

But nothing good lasts forever. After a while, that shiny new obsession starts to dull at the edges.

Luckily, there are always a few warning signs to look for. Here are five indicators your fandom has jumped the shark—through the lens of My Little Pony: Friendship is Magic.

Brony fandom—adult fans of animated children’s show My Little Pony: Friendship is Magic, grew from a handful of 4chan users to tens of thousands of people in less than three years. In any group that thrusts that many people together that quickly, there are bound to be disagreements—and bronies have them in droves.

On Tumblr, multiple blogs exist for no purpose beyond documenting when bronies get out of line. Whether it’s racism, sexism, or bullying, it’s all on record at Prejudice is Magic, Brony Say, Brony Horror Stories, Sane MLP Fans, and Rabid Idiot Brony.

Of course, the crimes found on these blogs aren’t indicative of the majority of brony behavior. However, there have been several bullying incidents that have made bigger waves. For example, it’s hard to find a brony who hasn’t heard about Bronycon founder Purple Tinker’s harassment at the hands of some assailants supported by rival brony convention Canterlot Gardens.

Recently, Purple Tinker posted on Tumblr that in the interest of peace, she was going to stop speaking out about her harassment. But if Tumblr is any indication, Tinker’s reputation is permanently damaged.

My Little Pony: Friendship is Magic found one of its earliest fan artists in Yamino, a cartoonist who has garnered notice from Lady Gaga. But Yamino disliked dopey fan character Derpy Hooves, whom she said might be seen as demeaning to the mentally disabled.

When Hasbro agreed with her, bronies cast Yamino out of the fandom—with death threats. She has since stayed quiet, but just this month prominent brony musician Yelling at Cats recorded a rap song in which he threatens to murder her.

“And people wonder why ‘bronies’ have a bad name,” Yamino wrote in response.

On Thursday, Joanna Blackhart, the host of popular weekly livestreamed talk show, My Little Dashie, had a modest proposal for the fandom on her Tumblr: change the name.

“So since apparently bronies have lost their collective minds and gone crazy, I’ve decided its time we start using a new word. In my mind, the word ‘brony’ at this point is pretty insulting. Therefore, I will start calling cool people who are into the pony community ‘macaroni.’”

“Lately, more and more fans are finding it harder to associate themselves as ‘bronies’ due to the growing amount of negative connotations with that term,” Blackhart told the Daily Dot. “So more and more, people aren’t identified as bronies, but rather merely as fans of the show.”

When bronies first came into mainstream awareness, everybody wanted a piece of them. From the Wall Street Journal to Fox News, journalists strived to understand—or at least gawk at—this strange new phenomenon of men who like ponies.

By now, even Jerry Springer has figured out the fad, and it’s getting tired—partly thanks to bronies’ vigilant (and justified) efforts to prevent being portrayed as deviants in the news. Even Walmart has tried to capitalize on the fandom, generating a retro-style shirt that many bronies think is better left on the drafting table.

Even though bronies didn’t always like the way the news covered them, the news did serve a valuable service by informing potential new members about the fandom.

With a hostile environment apparent to insiders and outsiders alike, it’s no wonder fewer people are choosing to identify as bronies. Right now, in the lull before Season 3 airs in November, a brony named Cerulean Spark told the Daily Dot he’s seeing the same old faces around his regular brony haunts. He calls this the fandom’s “long tail,” breaking away from its peak popularity and developing a smaller, more specialized following.

“I don’t think anyone would disagree with the assertion that the days of the fandom’s explosive growth are over,” he said. “The fandom is very dependent on the show for new material, so the lull between seasons will inevitably cause a drop in fandom output and a corresponding drop in new members.”

Cerulean predicts the new season of will attract some new fans. However, the state they find the fandom in may deter them from staying very long.

The four reasons outlined above are but symptoms of a larger problem. The biggest reason brony fandom is jumping the shark is that it lost the values that held it together in the first place.

Whenever Daily Dot reporters talk to bronies in the wild, whether at Brony Fan Fair or Otakon, they have one response for why they got into the fandom: the show’s underlying values of friendship, love, and tolerance for others above all else. But while those tenets are the backbone of the show, it’s getting harder for some to recognize them among fellow bronies.

“The whole point of the world that was put on television to show younger people how to cooperate and live with each other in harmony,” Cabal, the founder of brony chat service RainbowDash Network and a special guest to the first Bronycon, told the Daily Dot. “Soon, it will be like Pokémon or Hello Kitty. Younger kids will recognize these icons, but will never know the real reason why they still are pervasive in our culture as memes.

“Now, it’s just selfishness and the bullying of our members driving our numbers away.”