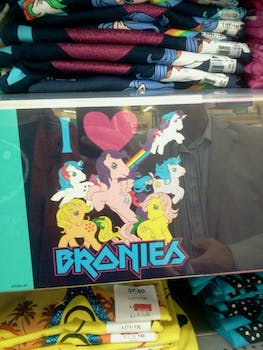 The store's attempt to court My Little Pony: Friendship is Magic fans backfired because of one big error.

If Walmart is attempting to lure bronies—adult fans of My Little Pony: Friendship is Magic—to its stores with its latest T-shirt design, the effort is not working.

The girls’ black shirt with pink glitter details is emblazoned with six original My Little Pony characters and the text “I [Heart] Bronies” in heavy metal script.

The problem is that the ponies on this shirt starred in the ‘80s My Little Pony cartoon, not the modern TV show they idolize. In their language, these are Generation 1 ponies. Bronies prefer Generation 4 ponies, which were created far more recently, in 2010. In other words, the bronies have about as much to do with the ponies on the T-shirt as Cowboys fans have to do with the Redskins. This strange juxtaposition caused Equestria Daily, the largest brony news site, to dub the shirt a complete miss.

“This is like a “I <3 Trekkies” t-shirt with C-3PO and R2-D2 giving each other a high five over the smouldering body of a cylon,” redditor cyberscythe wrote.

In fact, some bronies found the shirt so offensive that they weren’t sure it was real, and might be an image designed to troll them.

“how much you wanna bet the person who designed these shirts is a hater lol,” Anthony Castro wrote on a Facebook share of the shirt.

However, Walmart assured the Daily Dot that wasn’t the case. A spokesperson told us the T-shirts are available in 1,000 Walmart stores already, and will soon be available nationwide.

“They are very popular and the trend is growing from the new cartoon,” the spokesperson said. “We choose the vintage characters since that is what our customers respond to.”

Still, bronies are pleased that Walmart is paying attention.

“[I]t’s cool that Walmart is planning on marketing brony stuff,” Geno_Blast commented on the Equestria Daily post. “[P]erhaps if they were to correct their error in future products it could be a good thing.”