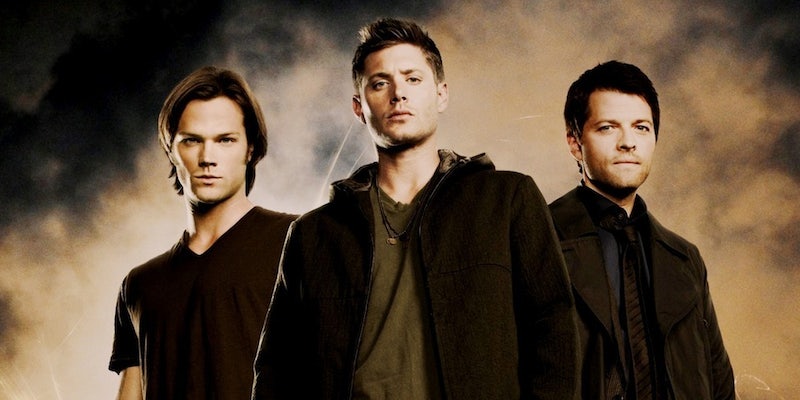 ‘Supernatural’ can thank its fandom for its audience growth

In the midst of plummeting TV ratings, Supernatural’s adult audience grew by 27 percent.

Network TV ratings are sinking like a stone. With a few notable exceptions (Scandal is knocking it out of the park), most “popular” TV shows are doing worse than they were last year.

TV critics talk about what a blessing it is that shows like Hannibal and The Good Wife get renewed in spite of their declining ratings. But what about Glee? Over the past season, its ratings dropped by 45 percent among adult viewers under 50. Likewise, the previously undefeatable NCIS franchise is hemorrhaging viewers, along with other crime formula shows like Elementary and Person of Interest. Vulture has a full graph of last season’s primetime network TV ratings, and things really don’t good.

Good ratings are to be expected from household names like Law & Order: SVU and Grey’s Anatomy. But among the handful of shows that are actually doing well, there is one show that immediately stands out: Supernatural.

Over the course of its ninth season, Supernatural’s adult audience grew by 27 percent. This is second only to the increase seen by Scandal, a highly publicised show by star producer Shonda Rhimes. Honestly, Supernatural just doesn’t feel like something that should be doing this well. And yet. 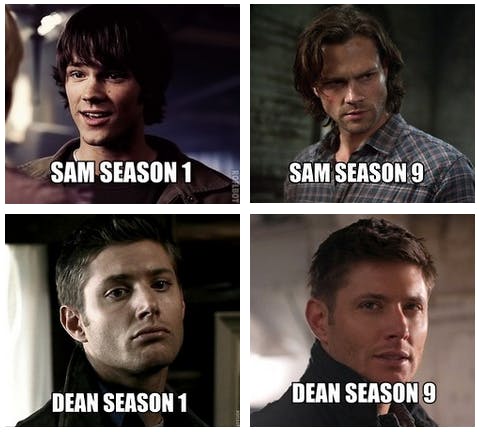 This year, Supernatural was renewed for its tenth season. Of course, Smallville managed 10 as well, playing to a similar audience on the CW. But that was several years before the recent overall decline in TV viewership, and Smallville always benefited from the brand recognition of Superman.

Supernatural, on the other hand, has never had the broad appeal of America’s most famous superhero. Instead, it’s given us almost a full decade of Sam and Dean Winchester driving around Vancouver forests masquerading as Middle America, killing demons and angsting over a neverending roster of interchangeable doomed female characters.

If you don’t know about Supernatural’s fanbase, the show’s ongoing success must seem kind of inexplicable. Supernatural doesn’t receive much critical attention outside its target audience, it doesn’t star anyone particularly famous, and to outside observers, it has little to set it apart from shows like The Vampire Diaries, True Blood, Sleepy Hollow and Teen Wolf. Yet in 2012 it saw the largest ratings bump on network TV (22 percent), and this season it was only beaten by Scandal.

So, what has drummed up Supernatural’s ratings over the past two years? Actually, it may not be the show itself, but its fandom.

Supernatural’s fan following has always been intense, and often at odds with the goals and desires of the showrunners. The original expectation was that Supernatural’s audience would be mixed, with male viewers engaging with the show’s American Gods/Hellblazer concept. Instead, women and teen girls started watching in droves, and it took the show’s creators a surprisingly long time to acknowledge why much of that audience was sticking around: the intense, at times homoerotic relationship between the lead characters.

At first this was more to do with viewers being invested in Sam and Dean Winchester’s relationship, but in recent years Destiel (the relationship between Dean and the angel Castiel) has been the main driving force of the fandom.

Since Castiel was introduced in season 4, there has been a noticeable correlation between his appearances on the show and a general uptick in ratings. When he was removed from the lineup of regular characters in season 7, Supernatural experienced its worst ratings to date. Ratings went up when Castiel was given a more significant role in season 8, and up once again when he was made a regular cast member in season 9.

On his own, Castiel actor Misha Collins has a formidable social media presence, with his GISHWHES fan community behaving a lot like a larval version of Hank and John Green’s Nerdfighter movement. With 1.49 million followers, Misha Collins’ Twitter audience is three times the size of Supernatural’s official account. Combine his personal fandom with that of Supernatural (and by extension, Destiel), and you have a social media juggernaut.

Along with BBC flagship shows Doctor Who and Sherlock, Supernatural is the third corner of the Tumblr fandom trifecta known as Superwholock. Superwholock is so ubiquitous in the general fandom community that Supernatural has spread mostly by word of mouth, without the help of the kind of official social media presence achieved by Hannibal or Teen Wolf. People read some Supernatural fanfic or see enough Tumblr GIFs to get them interested, and then they start watching the show, either catching up on DVD or (more likely) via online piracy. In 2013, Supernatural was the most reblogged TV show on Tumblr.

It’s an interesting case because unless you’re in the specific social bubble of fanfic fandom, Supernatural’s ongoing success is practically invisible.

The Vampire Diaries, Community, and Glee all have far more vocal fandoms in the wider cultural sense. Community has even been at the center of several relatively high-profile efforts to keep the show on air. However, all of these examples have seen a significant drop in ratings over the past couple of years (in Glee’s case, disastrously so), while Supernatural continues to draw in more and more viewers

But oddly enough, Supernatural’s creators have not made much visible effort to cater to this audience. They evidently realized they were attracting a whole lot of fangirls, but this never really translated to an increase in “female friendly” storylines (i.e. not violently murdering every single female character), or to the kind of marketing that specifically targets fangirl audiences.

After seven years on air they did introduce a cool lesbian geek character played by Felicia Day, but that was only after several episodes that either explicitly made fun of fangirls or (bizarrely) portrayed Supernatural’s fanbase as predominantly made up of male nerds.

The main attempt Supernatural has made to engage with its huge audience of slashfic shippers is… queerbaiting. An increasing amount of gay subtext and no-homo jokes, but with no serious intention to follow through and reveal that Dean is actually bisexual and/or in love with Castiel.

The show’s writers are unlikely to cave to fan demands and make Destiel canon. A TV show is not a democracy, after all. Still, if they continue to include so many scenes that fans interpret as self-aware queerbaiting, it may wind up doing more harm than good. With the gap between canon and fandom output widening with every season, will that fanfic-oriented audience keep increasing? Or are we likely to reach a tipping point, where fans give up and begin to tune out?

At the moment, it looks like a lot of those new viewers are watching the show for something that isn’t actually happening on screen.